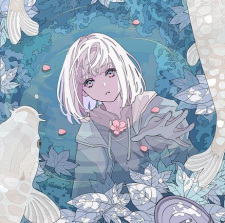 Ilikediffgenres Oct 14, 1:46 AM
yh I wanna rewatch monster some time
I recommended it to my gf and she also loved it :)

hope you get to visit it :o

I hope you are doing good,
greetings from Germany :)

Haha I don't get tired easily I'm mostly just exhausted from how mundane and boring everyday has been so far..


That is beautiful (= I'm a bit jealous.. I used to play the Violin, my dad would teach me everyday.. but eventually I just.. stopped =/ I still want to get back and start learning it again after I'm done with all of this.
I wish I could watch your videos, dancing is absolutely beautiful to look at, especially figure skating..


And dude I'd say I'm the boring one lol.


For now I'm not sure what to pursue anymore... I originally joined the Military because I wanted to get into one of their special forces, and I still am. But we'll see... on the other hand I want to get back into music because most of my family are musicians. My sister stuck with it but I heard she's becoming lazy about it.. I love watching my dad and my sister play, brings tears to my eyes everytime. It didn't use to do that, but I feel like I grew up to start loving the instrument.
Sorry for going off about myself I get a bit chatty sometimes!!

Thank you for sharing the things you love <3 I'd love to know more about you.

Strawberryy Aug 29, 8:32 AM
Sorry for the late reply Lia, the internet here is really iffy =/

And thank you for the wonderful reply!! and yes! I also loved Juuzo, that little cutie.

It's been a long day and I'm super tired.. when I click submit comment on these things it won't even go through because of how slow the internet is haha I have to keep trying about 10 times and refreshing the page >.<

Tell me more about yourself, or just talk about anything random?

And dude I've been trying to send you this comment about 5 times now but the internet here is so slow that it won't send.. the truth is I can't even watch anime at the moment because of the internet, I have to get wifi first so I can download anime on my phone and start watching it >.< So really all I do is come on here and check out some good shows that I can watch later, and talk to people .__.

And AB can't be that bad!! Canada is beautiful (:

And about TG, dude!! its my first manga I ever completed too lol. It was recommended to me by a friend (Who is from Canada too lol!!) and I loved it!! Both the first one and Re:. (Favorite character btw is Kuki and um.. the eyepatch chick? Caught me off guard about what she did though lol, also I love Amon.) And yesssss everybody I talk to, I tell them the ending was sooo rushed... Villain came out of no where (I know he "showed" up at the beginning. but still..)

Also.. if you haven't noticed im horrible at keeping conversations going lol.. I'm not as smart as some people on here and not as interesting either heh. But I try my best (:

Hope you're having a wonderful day !! <3 Don't let anything ever get you down.

Strawberryy Aug 24, 5:26 PM
Thank you soo much..
I came to Japan because of work and I live in the Kanagawa prefecture .. I love it here ^^ But I don't really have many friends out in Japan >.<
And that's fine haha, I have a few friends that live in Canada so I've always wanted to visit there ^^
By the way your pfp of kaneki is beautiful <3 Re was my favorite manga, especially the beginning part of it, the ending was.. not so much lol.
I'd love to talk about anything you want (:

Thank you for letting me know about a site where I can watch the movie. I hadn't heard much about the movie, but I realized it aired when I recently looked through my PTW. I'll have to check it out later and give it a watch :)

Strawberryy Aug 23, 1:56 AM
Gorgeous profile and character list ^^
Also you're Japanese !? That's extra cool <3 I'm in Japan at the moment and trying to learn Japanese .. but it's quite difficult >.<
Ciao~

I saw that you completed the Made in Abyss 3 movie and was wondering where you were able to watch it? I've been looking for it but haven't been able to find a site that offers it yet.

_cjessop19_ Aug 18, 7:38 PM
I am everywhere and yet nowhere on this site (I saw your name pop up in an episode discussion post).

Well I'm planning on rewatching LotGH when I finish the novels, and if you like space operas or political dramas then you should definitely give that series a go.

Im really generous with my ratings , I rate whatever is more enjoyable to watch as a whole .

XxLiaxX, I hope you like Machouvelvelismo de Busou Shoujo and a lot of fun ( ✧≖ ͜ʖ≖)

I loved the first season and I liked a lot of epsodios from the second, some more than the first. However as we approached the end of the series I started to feel that a lot of time was being spent on villains and my least loved characters, I thought "Well, I'll stop watching and come back when I feel like it, I bet iI will love the ending again even tho it isn't as magical as I felt in season one." but I was slow to feel like it.

And the idea of ​​watching all the epsodios of the second season a second time to make sure of getting the most of the finale kept me from picking it up.

The reason is probably because my favorite part is seeing Mob deal with its own self image, epecially those epsodes that where very slice-of-life like and I felt that the show wasn't as interested in those kinds of epsodes as it was before.

I bet the ending is epic, maybe it’s really worth watching again, but until I hear a good argument for returning to the series I’m not sure if I’m going to return. But maybe I will, now that you remebered me of it, I don't feel as burned out as before.

Anyways, don't take a dropp from me as a "I don't like it" I drop a lot of shows that I love. and kept some in the on-hold hell for mounths and some how managed to watch shows that I literally hated (And I don't really get why I did watched those until the end, but since I don't do that anymore I will guess it was because I was younger and dumber than now, or cute girls).

yura_marinette Jul 17, 11:30 PM
Hello! I found you on the forum post for "Japan sinks 2020", I'm not sure which episode though. Your profile page looked really nice :)
Yes, the second season was really good! I'm hoping they make a season 3.
All Comments