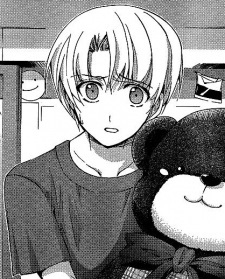 nothing against your drawing (Till it's beautiful)

Osguinaro Apr 14, 2018 4:49 PM
Hello :D
The truth is that all the gestures that are already there are one of the worst, oldest and pointless of crapiness.

It was a minor background role in Eromanga-sensei. His page credits it as "classmate".

Coldonylum Nov 1, 2017 2:40 AM
some pingu protection police over here. Saw your comment on Kostyan1996's profile and wtf xD This site exists for the purpose of recommending people anime to watch and rating it (no matter how bad it may be - in terms of actually giving it a fair score). It is logical to check the highest rating list or the popularity list for new watchers and pick what they want to watch. There are reasons why some things are popular or rated 'good' by the public. Ofc no one will actually take the pingu 'meme' seriously but it just ruins the whole credibility of this website and what it stands for. It messed with the whole scores of other anime, bumping them lower because of a stupid 'meme'.

About you clinging onto the fact that he rated it a 1/10 - yeah sure hypocrisy whatever. Well no xD. Kostyan stated that he will watch it seriously and later give it a real score ("probably a 5-6"). I see him rating it a 1 as trying to help this damn site by reducing the average score - its logical although pretty futile but whatever

Kostyan1996 Oct 28, 2017 7:30 PM
Well I think it will only change one thing - people will stop thinking that it was butthurt or whatever. Other than that it's not even a review (I doubt there is one serious review on Pingu anyway) so I don't think I should change anything until I watch whole Pingu - and I will do it just because I want to give it score it actually deserves - and give it a proper score. I wanted to get some attention on the other side of this meme and, I guess, I achieved it, now I know that actually alot of people hate this whole meme situation. In fact, most of first part in my review like "lying to yourself" thing was written randomly on the go just because review was not long enough. Basically, more aggressive approach for more attention.

Regarding objective and subjective reviewing - it probably should be like you described, but I just can't take reviews on MAL that serious. I still think that subjective reviews are far more valuable as they each bring unique point of view, while objective reviews watch situation from one point (aside from fact that reading objective reviews is just boring for me). Score is objective and universal by itself. Basically, I see it like this: score is objective part of review and rest is just opinion, feelings, etc. of man who wrote review. More than that is that all my scores in my list based solely on enjoyment I got from watching this anime, that's why I don't care if certain anime is cancer to anime industry if I liked it. Note that it's all my vision of it, I do not insist that everything should be like I said, but I view all this review and scoring situation as I stated earlier.

Yes, maybe not everyone should trust scoring system, but as I said, it was quite precise for me for picking anime I should and should not watch. It worked for me to this day so I will continue use it in a same way and insist on fact that it's very useful for certain group of people. So far there were just a few examples where anime that was rated good by community is straight up awful for me - Watamote, Serial Experiments Lain, To-Love Ru (first season only) and Chobits.

Kostyan1996 Oct 28, 2017 4:21 PM
Only reason I wrote review is that I didn't see any bad ratings, I saw just 10/10 in reviews so I wanted to do opposite thing. I already said that I will change it to actual score later, when things will settle down.

I can actually imagine that this people exist, in fact, I have a friend that asked me if it's worth to watch because reviews are so positive (he is not really into memes).

Actually, I watched around 500 titles and overwhelming amount of them were rated by me close to score they have on MAL. So far rating was really good thing to measure anime quality before watching it. It is, obviously, not precise, but if anime has 8/10 or more, I will like it in the end 90% of the time. Same thing goes to anime with score below 7 - I did not like it like 95% of the time. That is probably because of the fact that my taste is pretty close to mainstream taste, but it just proves that rating is really good for people like me.

oh I'm on ep 11/148 rn they are taking an exam to become a hunter, but the thing is that there are all kind of hunters in that world so I'm guessing that at some point they'll decide what'll they hunt XD
dunno how to describe it nicely XD but it's really interesting for now + rating is 9,1 so I'm hoping that it gets more epic later, but so far so goo ><

Trollin_Lolo Jul 18, 2017 12:22 PM
oya oya that sounds pretty good :O
I hope I'll get the chance to finish it this summer ><
I've started with hxh and cowboy bebop and I'm pretty hype about those two /o/

Matoro_Mahri Jul 7, 2017 9:33 PM
Oh, just keepin on keepin on, you know how it goes. I hear everything except Made in Abyss shit the bed this season, it'll be good to have a light one. Backlog grows longer by the week. Anything stand out to you recently, seasonal or just in general?
All Comments