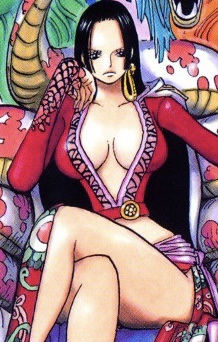 I've been fine, just enjoying Naruto for the last month or so. I've really loving the series to the point where it has really took over my life, so not focusing on any other anime at the moment. I've so invested into the series at this point that even for a long series that with so many fillers in between, I barely have taken many breaks in between or skipped any fillers. Despite the series being so long, it has gotten me engrossed & invested to the point where even after watching close to 200 episodes of it I'm not tired of it in the slightest & am left wanting more & more of the series lol.

I also did watch One Piece up to episode 18 & was really liking it as well, especially that arc involving Usopp, Kaya & Kuro which got pretty intense, but I decided to put it on hold for a while since I wanted to focus more on Naruto; since it's hard to put of Naruto when the series has grown on me so much.

You seem to be really enjoying One Piece at the moment as I can see, so good luck enjoying more of the series. :) Also I see that you put Gurren Lagann on hold after 8 episodes, well that's understandable of course if you are really enjoying One Piece & wanna focus more on the series. But Gurren Lagann's story & plot really picks up after the point where you have watched, from where gradually gets crazy intense episode by episode, with especially the 2nd half of the show (episode 17-27) being a total emotional rollercoaster, so I'd recommend to jot to put it off for long. If you managed to enjoy Gurren Lagann up to the point where you watched, you're gonna be in for an amazing experience with the show later on. Did episode 8 leave some sort of impact on you BTW? ;)

345EdwardElric Jun 29, 2020 6:35 PM
Just wondering but did you somehow accidentally remove me or something like that? I was really surprised to see an FR from you since I remember we being already "friends" here before. :P

Yeah, Madoka Magica was really well crafted. I had heard elsewhere that it was darker (with no explanation as to what made it darker), but other than that I didn't know what to expect. I liked the OSTs a lot, as well as the characters and the artwork. I just finished Fate/Zero season 2. I enjoyed it, but it's not one of my most favorite series. The second season suddenly got a bit more gory than what I was expecting (like when Lancer died - that shocked me! I had to look away for a bit because the brutality of his death was a little too much for me). I also had difficulty adjusting to ufotable's animation style. Sometimes I really liked the CGI, but other times I felt that it didn't help the series. I plan to watch the sequel, Fate/Stay Night, at some point, but I wanted a break from the series before I resume it.

345EdwardElric Feb 29, 2020 6:32 PM
Pretty good as of now, though life was really hard for the last 1 month and a half where I had to deal with plenty of tough issues in personal life and so on. My mother was really ill for a month or so before she gradually made a full recovery, secondly my laptop stopped functioning for some reason & I had to give it for repairing, which means I had to handle work & stuff without it....having to deal with all these issues were quite difficult indeed, a main reason why I was on a total hiatus from watching any anime & stuff for the time being. I still used to be pretty active in the forums here in the meantime, especially in the games section, but honestly that was just for relaxation in order to relieve myself from the IRL pressure. But well, things have finally come together in the last few days, with my mother finally having recovered fully & me getting my laptop fully repaired back, which is why I've finally resumed watching anime again like about 4 days ago.

Anyways, I have kind of noticed that you haven't really been on this site that often as of recently so I'm guessing that you may have been really busy in IRL stuff or something like that in the meantime.....if that's the case then I can totally relate to that given how tumultuous my life was for the last month & a half. So have you been watching any anime & stuff in the meantime (I obviously have been barely able to given my harsh circumstances but like I already told, I have resumed watching again for the last 4 days & have managed to finish a a couple of short-length anime in the meantime, that's about it).

CCC47 Jan 18, 2020 9:41 AM
Hey! Hope you're doing well. I wanted to thank you for the recommendations you sent me about two months ago. I finished PMMM in early December and I was shocked by how hard the anime's ending hit me! At first my eyes started watering around the part where Homyra was saying goodbye to Madoka after Madoka made her wish, but then I was bawling my eyes out when Homura was with Madoka's little brother and he was drawing Madoka in the sand and yelling "Madoka! Madoka!" That broke me. It was an amazing series and I really enjoyed watching it. The music was also really nice. I'm currently watching one of your other recommendations, F/Z, and so far it's really good! The characters are really interesting and so is the plot. I'm interested to see how it will all turn out. Anyways, I wanted to thank you for the recommendations and I will eventually get to Clannad! I know you said it's really good... I'll be sure to check it out some point during 2020 :)

345EdwardElric Oct 30, 2019 7:39 PM
Glad to know that you've been doing well. Didn't know that you had a sinus infection or something like that, so nice to know that you're feeling a better. My illness hasn't really gotten all that much better though, it's been going more or less for the last 5 days. Viral fevers are sometimes pretty strong which don't tend to recede easily & I seems to have caught one of them. :/ I've been mostly on medications lately...my fever seems to have reduced a bit for the last 3 days but that's about it; the fever still seems to occasionally come back from time to time.

I see. Just curiously didn't you tell me once in SPPF that you were going to watch Gurren Lagann next? I'm surprised that you changed your mind so soon but OK. Hope that you get around to watch that sometime as well cuz Gurren Lagann is also an amazing anime as well like I told you before: crazy, bizarre, whacky & intense; it's highly entertaining + could be an amazing ride once you manage to get into it, it basically takes mecha action-shounen to an extreme....and then goes past even that. :)

Have you listened to it before? If you have, I guess you should already know about how much of an energetic vibe it actually has to it.

I can't speak for Monster since I've never really watched it though, but for Cowboy Bebop, I really didn't like it much, it's way too much episodic without any plot-storyline whatsoever.....honestly it just never was my cup of tea at all. But well, let's see if you enjoy it or not. :)

I personally am still stuck with SAO till date lol (been watching a few anime whenever I'm feeling a little better). I've finished Season 2 of SAO & its sequel movie Ordinal Scale, and started the 3rd season Alicization after that. Have to say that, though the 1st two seasons are characterized by a lot of ridiculously dumb & bad writing a times along with a few really disappointing arcs, the movie Ordinal Scale & Alicization are comparatively a lot better indeed.

345EdwardElric Oct 29, 2019 10:54 AM
Hi Vic, I guess we haven't really contacted or interacted with each other for quite a long time now since the fated day where (and several others) left SPPF. How've you been? I've have been pretty sick as of late, been down with a strong viral fever that refuses to be cured easily. :/

RobbWarged Oct 28, 2019 7:33 AM
Yep Mr Grimmer is a beautiful character, definitely my favorite from the show but Johan has also earned his reputation

janiwolf Oct 27, 2019 9:38 AM
Yea. Deciding what anime to watch can be hard especially when you have so many good ones in your ptw.