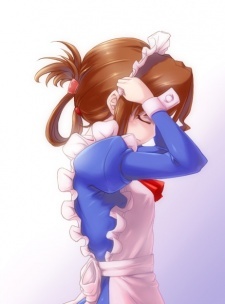 Guigas Aug 14, 2013 5:59 PM
Sometimes I dig up hidden analysis after scrolling through 10 pages of reviews, oO. A bit of masochism is needed. As for the downvotes, it's your fault since you obviously missed SAO's sheer brilliance at your analysis so it's only natural that clever people had to punish all your reviews in order to show that you are objectively wrong, to open your eyes and maybe rewrite them. After all, they had the trouble to read your long SAO review till the end before judging instead of just looking at the score given and press the unhelpful vote with ghost accounts, they don't do that!

Nah, I'm already used to my degenerated tastes so I don't mind to descend to your (our) level. Similar to you, I use the tag section to provide a brief observation of what got my attention or just to crack a joke or two, the latter mostly happens if I don't have anything noteworthy to talk about the anime in question.

That's good to know, I've seen far too many that gave up on MAL after witnessing all their reviews being slaughtered after a negative review of a popular show. Its about time for MAL to fix this "bug", they could do it by charging minimum requirements for one to vote on a review, i.e. a minimum of 50 entries, wait 1 week until you can vote after creating an account or even demand a comment for the reviewer if you want to vote, anything to prevent ghost accounts. AniDB for example can identify that sort of thing.

Fair enough, your secrets shall remain hidden from the eyes of us mortals so does your reviews

Stellio Aug 12, 2013 10:19 AM
Oh yeah, I forgot that you were a robot and required every little detail to be fulfilled to its maximum potentials.

I know your weakness now VictimBot, all that exhaustion heat must be suffering. Hehe

lpf Aug 10, 2013 4:44 PM
Well, I don't feel like reviving the beast. It would eat us (me) whole. Overhauling my earlier reviews is something that'd be nice to do, but I'm scared of reading my past writings. I always avoid having to do it, because I'm sure it'd give me embarrassment and lots, lots of work. I should put lots lots of effort into writing new reviews instead!

Thank you for the compliment. I had no idea you had read YKK, man. Melancholic yet serene... an accurate description. Struggling against chronic writer's block at the moment, but I should have more under way. I hope to read from you again too!

That was a great review! I enjoyed reading it although it appears some last minute reinforcements from external resources came as usual (not necessarily a bad thing). Here're some words from a wise man, to sum it up. Oh please, anything but Free! The ones you listed are pretty much of my interest as well, except Railgun (I probably won't catch up in time), RozenMaid, and Danganronpa. Here lies victim's shortfall, though if you're really that inconvenienced by and tiptoed on your sadist complex then try Fate/kaleid, or I guess Free'll be a good alternative this time if you've got a good stance to make, which is close to nil as far as one knows possible.

As a side note, I did go back and polish the Kuroko and a few other review(s) once I got the motivation from reading your's on Jojo, so nice job on spreading the love :p

The rivalry between Guts and Griffith far exceeds that of most other shows, seeing how those relationships are often handled with heavy-handedness, and this was mainly because it built their bond from the ground. Griffith kinda goes against the conventional depictions of flat villains, whilst Guts is iconic of human aspirations, which may be a bit generic but executed so well that it can be overlooked. My lingering hatred of Griffith is evidence that the arcs after Conviction still have some blood flowing in them, but Miura needs to seriously stop fapping committing lewd acts to DDK's ex waifus, or otherwise I really don't know what to think anymore.

Honestly I haven't even finished 3.0 completely yet, I closed out the window an hour or so into the movie. I didn't want to finish that piece of crap, so no not yet, let's not discuss it. Maybe Anno's finally lost his talent, not that he had much in the first place :p I'm rather fond of the notion that his vivid emotions after undergoing depression led him to create a masterpiece of a work on accident, but as scars do for most, they heal. Or rather, Anno's became cow udders, and now he's doing the pleasure of milking them himself, with Gainax as his companions.

Saluting even when the enemies fall? :0 Heh, I probably subconsciously do that as well, but it's your choice really. Do as one wishes. It's a great show thus far with the pacing, so get cracking.

That was a nice way of poking fun at 'objectivity', though I see that you completed it now! Yeah, most people agree the first season is able to construct a more linear, albeit nonlinear (if that makes sense), story in that it doesn't rely on melodrama. Whilst, the overarching issue of the refugees is more prevalent as a modern issue, despite the fact that the deliverance of the concept was off and a bit lacking. Also, Makoto's back-story was crap. As you've said, it's more interesting, but its focus on bombastic elements became a burden for the rendering process.. I think. Also this is weird but our compatibility went from 98 to 97.5 after you plugged in the score for it, weird.

Well, even I feel that both of us grade too harshly on comedy considering what they're intended for (entertainment), but it's really difficult to draw a line and create criteria of what makes a work so hilarious! So, I really don't give any credit to generic gigs anymore unless a.)they're creative and different in some kind of fashion during their execution in every episode, or b.)they're mixed in with the overall story, which is strong by itself (i.e. Penguindrum, Nodame, Monogatari). You should watch, hmm.. Mushishi, the Aria franchise, and Rose of Versailles once we're done with LoGH. I highly recommend it, in that respective order for priority too.

I wasn't s-suggesting anything, b-baka. :3 And I understand that about fb, just wanted to know how the finns establish their social life is all. I'm probably not qualified enough to be added as one anyway. ;__; Jokes aside, I have added a few closer people whom I trust so just wanted to see if you swing that way. As for the latter, you know what to do--go get yo gear ready, it's the weekend soon! I will PM you my account name then, or you could send me yours (if it's too difficult for one to figure it out). In spite of what you say, I've still gotta hear this ethereal voice of victim's. Also, in this day and age how does one not have a smartphone? This is simply ludicrous victim, the ladies won't like you if you don't have a s-smartphone! You and I both though, I dislike technology more than I like it; Ovid is surely smiling at this. Though if your were born a few centuries back being a mighty viking wouldn't have suited you well either. :p

I think I might pull a victim once school starts again, but this time with precatious airbag cushions. :d

Guigas Aug 9, 2013 11:53 AM
I got here after reading a couple of reviews of yours, Neon Genesis and Penguindrum, specifically. They are very long but also rewarding, what a neat analysis you did for both. It strikes me as odd the low number of "helpful review" votes considering the quality of your writing, way above many others with more "helpful" votes. Oh yeah, this is MAL... punishing good reviews is one of MAL's bad habits. I'm sure to read more of your reviews.

Anyway, I was interested enough with your analysis but the aspect that surprised me the most are your tags. Damn, I felt like I wrote them myself while I was reading them due to the similarity of our thoughts regarding many, many shows.

Why don't you account mangas on a list? You do seem to be quite knowledgeable about this kind of media judging by some of your tags and your favorite manga list.

StormVanguard Aug 9, 2013 10:55 AM
Well regarding score you have to include varying factors such as sound and art.
I will say TE was a disappointment but it was still good for what it is.

That being said i haven't had a chance to really read your review or any others i simply judged by score but you seem like a promising reviewer that has similar tastes and views like me such as hunter x hunter, one piece, jojo's bizarre adventure.

StormVanguard Aug 9, 2013 8:56 AM
I agree with everything except for the score regarding muv-luv TE.
Talk sometime, i also beat the trilogy.

Don_Don_Kun Aug 8, 2013 8:27 PM
Well, water resistance is a good stat and all, but I'm glad to see that you've finally returned to civilization, relatively unharmed. I'm actually not sure how you managed to catch up with most stuff over the past two seasons, since marathoning through 20-30 shows isn't exactly the easiest thing for most people (especially considering most airing shows tend to be rather sub-par these days). Hopefully you'll be back to writing your long walls of texts again, since this season actually has quite a few gems for once.

Heh, I guess you sort of missed the inception of my transformation into a full-fledged mahou shoujo. A few months back I started marathoning the remaining Precure seasons and have become rather hooked as a result. Although most of them end up being average, they've been a ton of fun to watch, and have helped me reclaim part of my juvenile spirit from long past.

Yeah, Smile Precure wasn't the greatest season, but I somehow found it to be really enjoyable most of the time. The comedy segments were pulled off surprisingly well and the five girls had a pretty good group dynamic. The show wasn't too hot during its finale though, which kind of spoiled the entire mood, though it was still good overall (it must have been for me to want to bother reviewing it). DokiDoki on the other hand, is a complete mess, and other than the ever so lovely Rikka, the show has few redeeming qualities at this point.