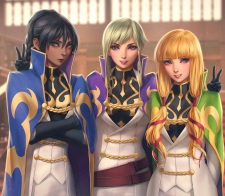 TarifKabir Jan 16, 11:29 PM
I can't believe you said Code Geass is trash while having 86 in your favorites.

PutinTheFabulous Dec 28, 2021 2:31 PM
Really interesting info, if Taniguchi wanted an icon he succeeded, in a big way. It is sad that the product was affected by those decisions. Also just like the writers I forgot that Kallen was racist lol.

ApolloCloud Dec 19, 2021 11:17 PM
Wow I actually respect that! It’s true that Code Geass pretty much force fed the fact that Lelouch was the best, although at times I felt that some of his decisions didn’t really make any sense…take the plot twist in season 1 that happened “accidentally” and caused a type of holocaust. As you are making a list of wasted characters then I think putting Nina in would be a great idea, she possibly has the motive and potential of becoming one of the best anime villains of all time, plus she served as a great representation for all yuri fans! I don’t get why ppl hate her so much, she was almost brilliantly written( im joking btw )

I have seen an episode of inyashiki but I feel that it’s something that I have to make time to sit down and appreciate, it’s an anime waaayyy ahead of its time. The “bang” memes on YT are also excellent.

Glad to hear you’re enjoying Gurren lagann, it’s a weird anime but although I actually hated it’s whole first half, it’s second half gave a sense of maturity that I appreciated. I also still need to check out patlabor, but I’m taking my time cause I know it’s gonna be great!

ApolloCloud Dec 19, 2021 8:34 AM
Interesting character list you have here, I want to assume that it's a list of your best waifus but then the grandpa from inuyashiki doesn't fit quite well then...but nonetheless, seeing fubuki in the top 2 is pretty nice.

Unknown_MAL Dec 19, 2021 4:23 AM
The problem with season 5 is that it spends too much time on the class A v B arc and not the villain arc. They have their priorities wrong.

Unknown_MAL Dec 19, 2021 4:22 AM
My Hero just gets worse as the seasons go by as Bones realized it can make some half-assed effort for it and fans will still lap it up. Its sad to see, but its not like My Hero was anything amazing in the first place.

VentusBrawler Dec 18, 2021 2:54 PM
well it's good to know at least some of your taste isn't completely backwards

MakimaFarts Dec 16, 2021 1:47 PM
I've heard great things about Gurren Lagann, I'll check it out at some point. Mechs aren't a favorite of mine but I'm willing to give it a shot.

Artma_Desu Dec 15, 2021 7:18 PM
Nope buddy, that is what we call Character Building in Anime and for Lelouch hes probably the best main character. he perpectly different from generally main character in Anime ive ever seen.