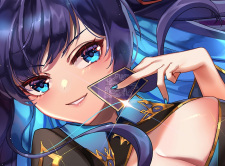 Lotus97 Jun 5, 2016 3:28 PM
I know what you mean. Since I often post comments on large gaming channels' videos I decided against putting something like "plays" in my username just because people would think I was promoting myself. And since most of my videos aren't getting many views, it's hard to get accurate analytics to see how people are finding me and what they prefer.

Lotus97 Jun 4, 2016 10:21 PM
You seem to have a pretty good idea of what to do, but if you are interested on channels that have tutorials on Youtube (or someone else asks for suggestions), I found a few:
https://www.youtube.com/channel/UCq7V02lKC5kUFtNur86kh-g
https://www.youtube.com/channel/UCrqy8sEdUgTwx7rpRtD9rlg
Right now I'm focusing on improving the quality of my videos so I'm not overly interested in promoting myself, but I still occasionally check out those channels to get a view of the bigger picture. The first one I actually stumbled on looking for Divinity 2 LPs :D

Cowabunga Jan 23, 2016 6:39 PM
No, haven't seen many Asian films,otherwise I wouldn't have you asked you for recommendations lol

I did watch some Hong Kong made Jackie Chan movies on TV some years ago, though. They were pretty decent. But I'm yet to watch a bruce Lee flick.

What are your favorite asian films? Been meaning to watch some, but can't really decide which ones. I have downloaded Oldboy and Ran sometime ago, though.

Cowabunga Jan 22, 2016 2:48 PM
Hello. If you don't mind me asking, could you tell me how you've studied anime at university? In what kind of degree could you write a paper/essay on it?

Also, what anime/manga is your forum avatar from?

Lotus97 Jan 4, 2016 1:16 AM
Thanks for the link. Limbo looks cool visually, but I'm not overly into platformers or side scrollers. I ofc want to play salt and sanctuary as well as a few older titles - Skyblazer, Castlevania X, and Sparkster. Also Apotheon which is a relatively new title.

Lotus97 Jan 3, 2016 4:52 PM
Hey. I recently started a gaming channel on YouTube and I was wondering if you had any advice and know of any good resources (videos, forums, etc) that would be helpful. A lot has changed (such as how tags work) since I had a channel in 2008 and my old channel was about politics so that's different anyways.

There was a also a Dark Souls mod which I was going to recommend to you, but if you don't have it on PC you might still be interested in watching the videos. I haven't tried it personally. Partially because I'm burned out on mods from Skyrim and partially because I'm scared to run shaders since Dark Souls 1 runs worse than even SotFS (although Lobos did say it should work on most 3D games).