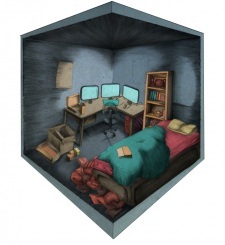 KRKodama Apr 10, 2018 1:31 PM
Yes, you can send me a PM. But if you plan to talk behind the back of someone, I hope you don't.
And if it's about Hitler... I don't really think it deserves a discussion at this point. It's not really relevant whether he stays in the database or not. It's not like it's hurting anyone anyways dude. I only replied in that thread for argument's sake and never really cared about it to begin with.

Ardanaz Apr 10, 2018 8:03 AM
I understand your frustration. The thing is that this topic has been brought up a lot and every argument has been made already. He's here to stay I'm afraid.

I read through the other thread you mentioned earlier today and while it's a lame thread, there's nothing too bad going on it. There's the occasional edgy guy thinking he's hilarious by having Hitler in his favs, but most of us just don't care about those kind of people.

We don't defend anti semetism at all and it's even stated in the rules that it's not allowed. Having him listed is not anti semetic though. I understand your frustration, but this is not the way to settle things.

I'm not going to do anything, but you can always send Aversa a PM. He's the one who locked the original thread. He probably knows a lot more about this than I do as he's been on the site much longer.

And don't call me biased, because if it were up to me I'd remove hitler too.

KRKodama Apr 10, 2018 12:30 AM
Did you at least get a notification from the moderator who did it explaining why he/she did it?

KRKodama Apr 10, 2018 12:16 AM
Oh no, fortunately the thread hasn't been locked just yet. xD
It was just a regular user mentioning that a similar thread was locked.

Strawberry_Bur Apr 5, 2018 4:47 PM
Yeah, that makes sense. There's also the subliminal messages where they flash words on the screen, but you're just supposed to kind of see them rather than read them. They're like words in a book, but used in a way I don't think a book could. That's interesting.

I'm pretty sure I've only finished Bakemonogatari; I really wanna see the rest.

Strawberry_Bur Apr 5, 2018 1:00 PM
I guess I like the way Monogatari does it cuz to me the only characters I care to see in that show are the ones that are talking. Hope you don't mind me leaving this comment here :) have a nice day