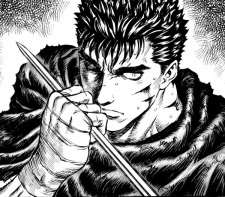 RickerttheChad Nov 17, 6:48 AM
ayy thanks man! sorry for the late reply, i dont use MAL these days

Kanedgy_ Nov 9, 10:44 AM
I finally started reading Berserk and I can already start seeing why everyone loves it so much.

_henri Aug 3, 9:23 PM
weird rule to have, people just make sweeping rules that are based on predictable coincidences. Of course people would give 10s to their all time favorites, but it isn't a rule that needs to be followed. What you're doing isn't weird at all lol

_henri Aug 3, 9:13 PM
Oh I definitely would agree, a structure like that wouldn't make any sense. Idk why it's so hard to give something like FMAB a 9 and have another anime with an 8 on your favorites list lol.

_henri Aug 3, 8:56 PM
That's a pretty honest way of scoring imo, gotta respect that. I rate based on my own subjectively established views on storytelling but we don't need that discussion since you've already been down that rabbit hole already lol.

_henri Aug 3, 8:43 PM
Oh it wasn't confusing or pretentious at all, I get what you're saying. I'm generalizing so correct me if I'm wrong, so you essentially rate an anime based on the bar it sets on itself seeing that you gave an anime like KonoSuba a favorable score.

_henri Aug 3, 8:03 PM
Just saw your interesting discussion with literaturenerd, and I got a quick question. On what metrics is your objectivity based on?

literaturenerd Aug 3, 7:40 PM
A weakness of being a subjectivist is that I fully admit my opinion is just that. A mere opinion that applies only to me. However, were I to convert over to the objective side I would overwhelmingly argue against the inclusion of anime in the high canon of art. If I were on Team Objective and assigned numerical value to art in terms of impact and intelligence, I would OF COURSE rank Evangelion over something like Elfen Lied. Elfen Lied would have a value of 5. Evangelion has a value of 10 and Crime and Punishment has a value of about 500. Even though Eva is better than EL, it's SO far from the truly great works of art that the difference between Eva and Elfen Lied feels relatively minimal.
All Comments