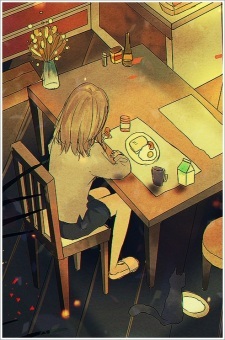 I will add you on discord! Take your time with reply! It's okay! No rush! ^^

Popura Dec 17, 2019 8:34 AM
Hey I made Anime-Planet account. I haven't really checked out the site yet just made it but it seem lot better than AniList for sure. Oh and I changed my discord name to koi#0497.

Inubashiri Dec 12, 2019 6:28 PM
Yeah I go in a bookstore every so often for nostalgia but its just too easy to just get all your books and such on a tablet now xD

SacoTaco Dec 12, 2019 5:15 PM
I used to be the same except with anime. Used to be an anime only person but after my friend kept nagging me to read up on the One Piece manga I found it entertaining since I could go at my own pace and there wasn't any filler included.

I've read up a bit on some of the Steins;Gate manga (content not covered in the anime), a bit of Beastars, a lot of different isekai mangas (what can I say? I'm a sucker for isekai), a bunch of different unknown mangas that have a handful of chapters. Lately though I've been a bit more into manwha/webtoons. There's a lot of great content out there. Series like unOrdinary or Solo Leveling are appealing. Most of the art is relatively good as well, and you see the artist's improvement throughout the chapters which is nice instead of a team of people working on one manga/anime.

Anyhow, I see you've got Vinland Saga on your currently watching. I've been on the fence about watching it since the synopsis doesn't give much information. If you could let me know if it's worth a watch. I haven't hear many people talk about it but when they do they say it's good.

Rsurect Dec 12, 2019 4:32 AM
Beastars and Babylon are my favorite shows this season, everything else doesn't compare, how about you? and are you liking pokemon sw/sh?

i did a little research what are mainstream anime haha, yep i do! but also i'm picky at the same time. like i won't watch it if i don''t think the plot is amazing or the flow of the show isn't entertaining XD i think mainstream animes i didnt watch are onepiece,naruto,bleach~

CaiAnJohnAnthony Dec 11, 2019 7:44 PM
For the first question, no. For now I only keep up to anime that is originally from a light novel or the anime itself is its origin. I've been busy lately

But I read some of this season's anime by manga, so I can actually answer your second question. Based on the arcs that will probably on the anime

Popura Dec 11, 2019 7:38 PM
You can count on me! <3 Yeah AniList was like maze to me lol I forgot about AnimePlanet! I'll check it out right away after replying to you and other people!

I see... I said lucky because lot of game servers are actually located in California so people from California usually have a really fast ping! For some people having a fast ping is a dream come true so yeah XD Yeah you are right, it's easier to make new friends than talking to old friend who you haven't talked in ages. It just feels awkward and really worst feeling if they don't remember you T_T

Yeah I think it will remind me but I'm in better place now so I should be okay... I'll give it a go soon and let you know how it goes! I mean I think I'll be okay but when I play it I could get depressed and stuff so yeah but I won't know that until I try so... ;-; Looks like we might have lot of things in common XD Yeah I played Harvest Moon before, that's was one of my sister's favorite games but I haven't played newer one since Rune Factory series came out. She sounds like my sister. It seems like my sister only seem interested in Animal Crossing games. She doesn't even play Pokemon anymore. ;;;; That's nice! It's been long long time since me and my sister played anything. We added each other in Pocket Camp but doesn't really do anything (more like can't) so yeah qq

That's... what I thought but stuff happened and me and my best friend fought and didn't talked for like two days. We patched things up and now things are back to normal but when that happened I raged and deleted Pokemon Sword copy from Nintendo along with save file so I'm at a point where I gotta start from the beginning T v T So yeah I still play on bestie's copy but working on getting my own copy too haha How far are you into game? I have discord! Add me! Cocoa#0497 I used to use WhatsApp too but I haven't logged in it a while so not sure if my account is still alive or not XP

It's okay! "Pokemon has spirited me awya~" I love that phrase! XD Of course I remember you XD It's only been like 2 weeks since we last talked but if you came back like year later then yeah then I'd be like (who was that again?) LOL I love the new Pokemon Anime! It started very strong and I might have already mentioned this but thankfully NOT A REBOOT so yeah I like the double main character format. They haven't used that since Pokemon DP with Satoshi (Ash) and Hikari (Dawn). You should check it out if you haven't! I just hope they keep this up and this season will be as good and Sun & Moon (which I thought was crap at first but turned out to be a masterpiece T v T) or better! XD

Inubashiri Dec 11, 2019 12:42 PM
I read comic books when I was younger, DC and Marvel not so much anymore. Most of my reading is just for job specific stuff, I'm a software engineer so most of the reading is if I need to increase my proficiency at something.

I didn't mean the magazine just the anime's you'd associate with it like Naruto, Bleach, One Piece etc (at the time)...I think the only magazine they had related to that was New TYPE, I haven't been in one in so long.

EmilioX Dec 11, 2019 12:17 PM
Yeah the I can also appreciate the main hero and heroine ending up together. Although I also don't mind a surprising relationship ending. the standard is nice because they usually make you like their chemistry. A surprising one is one that can break the standard and even though it might not be the one you hoped for, but atleast it's something different. Yeah sometimes it can be very interesting to think about how authors are gonna work around things, even though it's not always really good. I saw the OVA of Boku wa Imouto ni Koi wo Suru, I didn't really liked the OVA much, it was rushed and cringe-worthy. If you say the Manga is good, I might read it someday. I'm currently reading Siscon Ani to Brocon Imouto ga Shoujiki ni Nattara, it's a very cute manga, about a controversial relationship. I think almost all people would at least kind of like their relationship, because they are so cute together so far. Well I mean if all Japanse people would dislike controversial anime, they wouldn't still be making it, so there are Japanse people enjoying it. In the end anime and manga are depended on the Japanse market, so really good ones, with great reception in the west, failed in Japan and got no second season. That is true, I can appreciate people trying the make something with 'extremities', they fail often, but the ones that succeed will give you an experience you won't forget soon.

Well I heard the author self also wasn't happy with the ending of OreImo ,so that's probably why they aren't related by blood this time. Well they released an OVA not so long ago, so It might still be alive. Best we can do is hope. Even though I don't expect to much of it, I don't want to see who will end up together and how they end up together. Agree OreImo for me will also always be above Eromanga, it was also one I saw a while ago and I still keeps me busy from time to time.

Well it's not always easy to just start talking even online. It seems easy, but lot's struggle with it. It might be the fair of negative responses or having nothing to talk about. In the end some sites have really toxic people and can really make people afraid of talking online. The MAL community luckily is very nice and a good place to start conversations. It also helps if you have things you both like to talk about. I mean anime is a nice subject to start talking about and then the ice might be broken.
You indeed have a lot to say and that is very nice, it gives me also a lot of things to talk about. This way we both have it easy to talk easy to eachother. I agree this way you can relax and type and think a bit about what you want to say or talk about. I can also talk to people in person pretty easy as long as there is something to talk about. I don't like bigger groups though, I often can't keep up even online ^^'

I see you either got you list migrated or you showed a lot of dedication and did it manually. I am happy that I can see what we both have seen, this way I know what I can discuss with you safely without spoiling. :)
You have seen a lot indeed, I'm not even close to that number. :o

Well you've done it, nice!
How was your weekend? :)

hariettehime Dec 11, 2019 3:12 AM
yep they said the manga is really beautiful~ but i'll think about it hahaha. i'm not really a reader that's why i have a lot of list of anime than manga XD

That's good to know and hear, thanks. ^^

Inubashiri Dec 10, 2019 8:18 PM
Nothing wrong with that, romance is a nice relaxing topic to read. I didn't read the manga, typically Barnes and Noble only had the Shonen Jump stuff which got old after a while, seems though recently they started adding more stuff. I was able to get Spice and Wolf even though I already read it lol.
All Comments