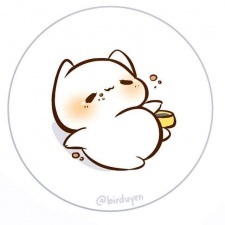 but a lots of spoilers bcz of blogs
polls quiz etc..

Kajo_Senpai69 Aug 28, 2019 8:28 AM
There's not much to gain from being a negative person towards others on the internet when you think about it at least from my perspective so it's great that a lot of people are nice here.

I hope that your net connection's good enough to watch anime without much of the hassles that came with a sucky connection like I did #360pLife While I'd like to watch more Western movies, they tend to lack the creative premises that can only be shown really well in anime so I can see where you're coming from and I agree. Weathering With You's in theatres starting today here so I hope that I'll have enough time to watch it in the weekends at least~ I grew up with cartoons but only started really watching anime a few years ago because of the lack of things to watch on tv and I eventually got hooked.

I have a Facebook account because everyone I know has one to talk to each other and everything I need to know about events and stuff are there and that's about it. I have Youtube for binging different kinds of videos daily and I have a tablet with the sole purpose of playing the Love Live SIF game ♡

I'm around the Crocodile Arc around 100 episodes in but I haven't watched any episodes for quite a while now but I might continue it after I take care of a few more anime I've been watching. Funnily enough, thanks to the PS3 game One Piece Pirate Warriors 3, I'm vaguely familiar with the events of the anime right until the timeskip that's probably hundreds of episodes away.

Internet is a lot slower here compared to other countries but I finally got a pretty decent subscription that isn't 9kb/s for once.

& Plz stay away with Spoilers as they kill the hype.

Hironoga Aug 23, 2019 7:27 PM
doing good getting through one piece been watching forever lol.