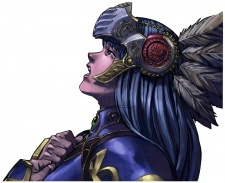 Diabetic_Senpai Sep 19, 2017 1:27 AM
Unfortunately I don't recognize that one,I believe that i could recognize it as soon as i see it
Thanks for looking into it,I would be grateful if you would continue to do so(If it isn't a tedious task)

Diabetic_Senpai Sep 16, 2017 1:51 AM
Oh I see,it certainly looks very decent.
It reminded me of an old anime/western cartoon that I watched as a kid(it came out in the 90's probably) I just can't seem to remember its name...It was about a tank crew gathering some kind of crystals in order to save the world if i recall correctly.If it sounds a bit familiar please do help me out to remember.(It was a episodic show,not a movie)

Diabetic_Senpai Sep 15, 2017 2:26 AM
Ah I see,ya it was a way freaking long text to write in one sitting.
Well it is one of my favorites,and as you said in the review it has a couple of flaws,but hey there is nothing perfect in this world.
Anyways what is your absolute favorite anime then?

Diabetic_Senpai Sep 14, 2017 1:06 AM
That is a freaking long review on Monster,but i agree on every statement you've made in it...I feel like you pulled a all-nighter while writing that thing :D

RyoKei-san Jun 27, 2017 2:49 AM
Ah, no rush, anime is to be enjoyed at leisure, whenever you feel like it. By the way, I have been considering whether to watch monster since I have read many great things about it and its labelled as a psychological thriller. I havent watch it because its old animation kinda puts me off. So is the story worth it? If it is, I wanna start on it, it sounds exciting.

themegamancave Oct 7, 2016 10:38 PM
Awww shucks Derrick, you really know how to make a guy blush. I appreciate the down low on NGE. Those are some of the same arguments I've heard regarding it, sometimes a show's intellectual message can hinge on the reception from the viewer. It looks like that's why the opinions seem to be polar opposites of each other. Thanks for the info!

themegamancave Oct 6, 2016 10:30 PM
I didn't know you had seen Neon Genesis Evangelion! All of the conflicting opinions on it make me hesitant to pick it up to be honest. Looks like you didn't care for it much either.

themegamancave Jul 17, 2016 11:42 AM
Whoa, that sounds like quite the work schedule! Although, if you get paid by the hour it probably works out in your favor! Sounds like you've got your work cut out for you in the alphabetical schedule, I can't imagine trying to power through such a daunting list o_O. Hunter x Hunter is quite the undertaking, but one of the most satisfying series out there... Just make sure you watch the 2011 version and not the dated 1999 one. I plan on revisiting the series at some point for the 1999 version, but I have to wait until the charm of the first viewing wears off. I also feel a tad old on the site, but I tend to talk mostly to people my age, so just do your best to avoid the annoying "teens". Cheers!

themegamancave Jul 16, 2016 12:23 PM
Glad to see you using your profile more and more. Let me know if you need any help or need some tips for anything! Hope Gurren Lagann is enjoyable!

RyoKei-san Jul 15, 2016 11:56 PM
Thanks for considering my request! Holy crap, you are gonna watch Hunter x hunter? I don't know about you, but personally, I find super-long series daunting to pick up. Thats why I avoid shows like bleach, one piece or naruto. Not because they are too popular, but because their episodes never seem to end.
All Comments