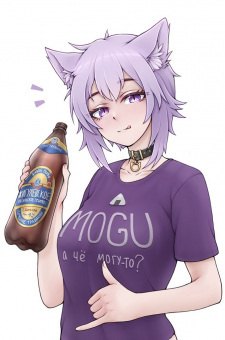 O-E-K May 10, 3:22 AM
Yes, that's right panda. I check the profile of some of those giving it a high score..it all makes sense. It's too late for them, their taste in anime can't be fixed. To each their own LOL

RebelPanda May 8, 3:01 PM
LMAOOOO sensitive 86 fans botted your review off of the page. This is just sad.

O-E-K May 8, 5:43 AM
After my review got removed, I am glad yours still stands. 86 is a horrible mess and I am glad some people agree lol.

Pyro81300 May 7, 6:59 PM
Despite how much I disliked Orguss, I'll probs try out Orguss II soon enough. Supposedly it's a good bit better than the og Orguss, but I feel like that's not saying much. If I remember, I'll tell you how I feel about it when I watch it.

Pyro81300 May 7, 6:38 PM
I decided to only put my top 3 gundam shows, cuz otherwise most of the list would just be Gundam lol. IBO is good, but there's a lot of other Gundams I like more and IBO s2 wasn't that good for me.

Diebuster I didn't really like. I loved the animation and music, but characters and story I recall disliking. I couldn't honestly give you a super detailed reason why I disliked the characters and story so much since it's been so long, but I do recall my general feeling on it. Strain isn't really that good, but I'm biased towards it for having Winry Rockbell's va for the mc in the dub and being a rare mecha with a female mc.

Also I just finished Orguss today, and I should really update that pic since I would put it as the worst mecha show I've seen lmao. Just made a review on it if you care, but legit I wonder if it's the progenitor of bad isekai. It's a 1983 anime, and yet it somehow has most of the tropes I dislike about modern isekai.

Pyro81300 May 7, 12:29 PM
Yeah, I can get that. If you don't want to play, I will say they're still really fun to watch since they're half visual novel half srpg. Most of the series is actually only in Japanse, but the most recent 3 (V, X, and T) have been translated into English. You can find the series for each here:

You can watch quality, no commentary lp's of the games here: https://www.youtube.com/c/180223/playlists

If you do give this series a shot, I'd rec V (more so V) or T first. X is goodish, but doesn't have the best writing.

Matt20am May 7, 7:23 AM
you genuinely don't understand the aspect of 86, maybe some of it and also if you literally read vol 2 and 3 of the light novel a lot of your problems would be solved. your problems are literallly not understanding the series. vol 2 and 3 make 86 a lot more clear to understand. not to mention how we're not even halfway through the show.

I gotta ask tho have you heard of Super Robot Wars? It's this long running srpg series that crosses over hundreds of mecha shows. The thing is the story and character interactions are 10/10, genuinely best crossover I've seen. You have Shinji Ikari becoming a genuinely cool kid cuz all the hotblooded characters rub off on him, in one game you can literally prevent Zero Requiem with Code Geass, protags from various Gundam series interacting with each other, I love it. If you're interested I can provide some more info, but on the off chance you have heard of it I"m gonna wait on a reply so I don't type another paragraph for nothing lol.

Pyro81300 May 6, 10:41 PM
Yeah I'll probs like it. I'm def enjoying 86 so far, despite its issues. Now tbh if the writing does start to go down the drain, then yeah I'll lower my score lol. Like my biggest problem with Code Geass (only comparing cuz similar series) was trying to fit 100 different genres in one anime that was supposed to be primarily a political thriller/mecha, and then s2 craps the bed with terrible writing. Here's to hoping 86 doesn't do that, it at least already knows what genre it wants to be.

Pyro81300 May 6, 9:58 PM
Hey, I wanted to say I liked your review of 86 and think it's well written, even if I disagree with it somewhat lol. The points about the more logical aspects of the show do make sense, and while idk if those will be addressed in the future you do bring up good points. Perhaps those just don't bother me as much, but I totally get why it does bother people. I disagree with the generic characters part, but only because I'm hoping they flesh them out as time goes on and just haven't entirely yet since there's only 4 eps out. I'll probs make my own review on the first cour once it's done.

Also, it's cool to see another mecha fan, and we have fairly similar taste outside of that.

Ndya_san May 5, 11:05 PM
"Thanks for dropping aot for this wit", except this project was started even before s3 and wit couldn't anyway animate s4 in 8 months, don't go around rating anime for your bias, it just shows in your review, if you want to blame anyone then blame kodansha for forcing studios to kill their staff and finish the project and rating an anime fully without even thinking it has room to improve is such a shallow look. Next time have some coffee, some chill pills and then review with your brain

Nathe_Kun May 3, 8:54 PM
Im gonna drop some SPOLIERS, so before that I'll apologize if my first comment sounded rude

The Alba pride themselves for being superior so they don't see the war as a threat. All the handlers see are blimps on a board indicating allies and enemies, they've never seen or experienced what the war is actually like so they won't feel pressured to do anything. Although, you are half right. Even when the Alba were faced with the reality of the war later down the LN they still didn't do anything.

Lena cares about the 86 because she was saved by one when she went to the front lines. Also, Lena isn't a special case. There are many alba who sympathize with the 86 and even shelter them within the cities. It's even revealed that some of the mechanics are Alba.

> If 86 wanted to start a revolution, they would have been started it much earlier.

This is just my understanding. Its because the 86 were to weak at the start to do anything

>Also, doesn't care at all about Shin's ability to kill the handlers is much more dangerous, and it seems really strange to me that Alba don't understand it even from the position "wtf why this pig killed a person from the superior race? kill him immediately"

Well that's the Alba. Turning a blind eye to everything for their own convivence. They're underestimating how Shin can kill is handlers simply because he is a pig. They don't want to show fear to a pig because that would only hurt their pride. Yes I agree that their stupidity can be annoying, but they did plan Shin's death with the suicide mission.

Nathe_Kun May 3, 4:48 PM
Ay just wanted to give you a little insight from someone who read the 86 novel. Your major critique is that the Alba don't care about the war and that they're being dumb so the writer can make them edgy villains (paraphrased of course). Well that's exactly the point. They are intentionally turning a blind eye to the war because they believe they are the superiors race. They believe that they are winning the war because there have had "no casualties" despite the deaths of the 86. Lena's uncle is even aware of what they're doing but doesn't say anything about it because he is afraid that if they start treating the 86 as humans then where does the blame for human cruelty go to? The alba.

For some reason one of your complaints is that the main characters are teenagers. Later it is explained that the Alba killed off all of the adults during the last war and all that was left are the younger generation. The only people from the war who survived are the mechanics who service the juggernauts because the Alba determined that they won't be a threat to them anymore. Also, the simple fact is that it is easier to emphasize innocence from the viewpoint of a teenager.

The reason why they don't investigate as to why Shin can kill his handlers is because they don't want to give more attention to the Reaper who can potentially become a symbol of a revolution for the 86.

Instead of trying to understand what the anime is about I feel like you're expecting way too much out of this show. You're looking for something that's deep when in reality 86 is just a simple show about discrimination. Yet despite it's simplicity 86 was still able to become one of the best light novels, which says something.

This is exactly why I don't take reviews from people who can't even finish half of the show seriously.

I can tell from your list that you have a very specific taste/expectations, so I can understand the bias you have against these shows. Must suck to not be able to enjoy anime casually.