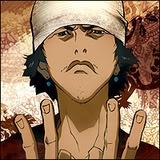 Have tried, but they can't take it seriously^^ it sucks;) but MAL's my escape place:D

I've watched a lot of series, like Supernatural and Dexter and Chuck... But Right NOW i'm watching The Vampire Diaries, The Walking Dead, How i Met Your Mother, Agents of S.H.I.E.L.D, The Big Bang Theory, Sleepy Hollow and Haven^^

Yes it's awesome much better Than the 1st one:)

Yeah i have:) but i'm on still stand right now:D but just like you i also watch other series, american series:) What series do you watch??:D

EmiLu-chan Oct 27, 2013 2:52 AM
Hi^^ Sorry for late answer:D
Damn it's been SO long, and i'm doing great:) schools a bit hard but i come by, though it's hard to find time to watch my anime and read my manga:)
Only those?;) i see, how far are you into them, don't they both have pretty many episodes?^^
Uhh about 20 i think, don't want to mention all of them, but um there's valvrave the librator s2, kuroko no basket s2, strike the blood, kyoukai no kanata, noucome and diabolik lovers, that're some of them^^
think you should watch some more anime dude^^

EmiLu-chan Nov 7, 2012 12:52 PM
ALso the movie series? Or the movie animation?^^
Seriously... flying is so mcuh cooler than sword fighting... though in real life, i would actually like to know how to wield a sword:)
No X-box? I only got a nintendo DS and a nintendo Advance, and a Wii, my brother took the PS3 with him when he moved, but it was also rightfully his, but i used it a lot:/
I only have two pokemon games, one for DS and one for the other.... the rst are all Super Mario games^^

I don't think Asuna will escape... she'll try, but get caught, and unfortubately when Kirito finally arrrives she'd be brainwashed... but the i don't know what maybe "power of love"( know sound ridiculous) will wake her up in the last second and they'll kick sugous ass together:)

Love fireworks, but we only use fireworks news years eve:)

That's good, it's my favorite site^^

Never played Final fantasy online,sorry:)
Flying is my absolute dream... i wish humans had wings... if i could play ALO, it'd do it all the time:) What's MMO? God you're a reall gamer aren't you:)

I REALLY HATE HATE HATE( to infinity) HIM! He's just so gross:P It makes me want to vommit every time he makes a move on Asuna! And she can't do a thing, and I can't do a thing, it like watching someone getting seriously sexually harrased and you're just looking at it from outside the window... really frustating, my thoughts are just "Kirito, get your ass together and come get her! or i'll ficking do it myself!"

It's was great, partied friday, relaxed saturday and wrote my asignment sunday, the day before i had to submit it:) How was yours?:)

EmiLu-chan Nov 4, 2012 12:24 PM
Hehe.... i actually watched the movie, bad idea since it confused me so much:) I had to find a site where i could read te whole plot for the origianl series, then i could kind of follow what had happpend:)

I really like SAO, though i think i actually like the second half of the season more... though i don't like Kiritos appearance in ALO as much as his appearance in SAO:)
Why U no like Kirito-kun? He's awesome, and cute:) And the girls only likes him... because it has harem into it, but he's still cool in my opinion, but i'm also a girl^^ Asuna is so awesome... really cool female heroine!<3<3 GAHH i really want to spoil something, but i can't since you're not that far in the series yet.... hurry up so i can really HATE on the new main protagonist(who you do not know who is yet) HURRY HURRY!:D

I think Gogoanime is a good Website to watch anime online but i would also recommend anime44 og goodanime, which are basically the same:)

I love SAO, kirito is super cool, and i think the animation is really pretty:)

Well it's just as rainy as England:/

xxxjapcutiexxx Nov 1, 2012 4:28 PM
Sorry didn't know you dislike Halloween. Out of all the anime I like Kuroko No Basket and Phantom: Requiem for the Phantom. So how did you get into watching anime?

xxxjapcutiexxx Nov 1, 2012 2:09 PM
Hoped you had a Happy Halloween....That's good to know....So what is your favorite anime? I like anime with good action stories...if you know any let me know.

EmiLu-chan Nov 1, 2012 10:47 AM
You should definitely watch it... Hei is awesome:)
I haven't watched FMA original... Don't think i Can Comprehend how it differ from the second series:) but of course i don't know if the original is better... You Can tell me if it is^^
I watch anime online since i don't want to spend the little money i have on it:) and i would have to ordre from the internet since, i Come from a small town were anime isn't Well known:)
Which country do you Come from?^^

EmiLu-chan Oct 31, 2012 11:16 PM
I also have FMAB(dub) and Code Geass on my list of favorites... Then there's Darker Than Black, Guilty Crown and Phi Brain: Kami no puzzle:)
I started watching anime about a year ago, cause i had watched a youtube video with clips from darker than black and it caught my attention... So the anime that Got me into anime was Darker Than Black:)
How did you start?;)

xxxjapcutiexxx Oct 31, 2012 3:41 PM
Well Phantom: Requiem for the Phantom has a lot of betrayal and violence. It basically about a guy name Zwei and the path he takes where is life drastically changes. I couldn't stop watching it. I don't want to give any spoilers away so I won't get into to much detail but try and watch several episodes and see if you like it.
All Comments