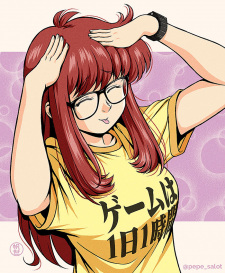 Radiostarkill Mar 31, 2:30 PM
I enjoyed your bleach review a lot! It practically sums up all of the negatives I had with the show! By the way, I’d recommend hunter x hunter (2011) if you are looking for a really good action shounen anime, it a great deconstruction of all of shounen and gets better and better as you keep watching, also the antagonists are S tier.

YusufSemiz Jan 24, 2:04 PM
You wrote that ''you seem to be backpedaling'' before deleting it
Only thing that angered me was deleting it. I wondered what other people thought about you and looks like I am not alone.

YusufSemiz Jan 24, 12:47 PM
No I don't have anything better to do thats why I started talking with you.
I just wanted to un-delete whole talk I am fine now.

''You reiterated yourself quite frequently''
Also I already told that in last comment. Still waiting for backpedaling part.

I was honest when I told you that you don't anger me a little bit
but deleting whole argument was a bit frustrating.
Good luck in your fake life

RafaelDeJongh Oct 4, 2017 7:06 PM
Well they do refer a couple times to the original, but as it's slapstick humor, it's not that it follows any kind of story so you can watch pretty much any episode randomly and you'll still won't miss anything. So yea you can just start with 2015 and see if it's to your liking.

Madness17 Aug 4, 2017 6:01 PM
Damn, it's pointless arguing with an idiot. I guess i'm really bored since i'm doing this anyway. You clearly weren't paying attention to what i was saying. So one last time:

I don't give a damn about your opinion, but your review is objectively BAD and doesn't justify that opinion.

Madness17 Aug 4, 2017 5:53 PM
Also you're an arrogant snob and a shame to other more competent reviewers out there.

Madness17 Aug 4, 2017 5:47 PM
Again, it's not your opinion that i have a problem with, it's the review itself. Characters and story, i can understand to a certain degree, those subjects are highly subjective, but then you go and give art/animation a 2/10 and sound a 1/10 without justifying it. You said that they cut corners and other than that there isn't much to complain about the animation, so why is it so low? And in the sound department you talked about the OP and ED, which are completely irrelevant because they're not even part of the runtime and you can just skip them without losing any information. You didn't even mention the background music, the sound design and the voice acting, which were near impecable.

This is what i mean by dishonest. You give arbitrary scores to individual categories just to bring your overall score down to the desired one, and you don't justify it.

You also base your whole reasoning on the fact that the anime is different than the manga, and that is wrong, because you're not reviewing the manga, you're reviewing the anime. You need to pretend that there's no source material and judge the anime based on how it stands on its own.

And those people who upvoted your review? They probably didn't even read it, they jus upvoted it because of their confirmation bias.

Although i disagree with your opinion and i find it harsh and biased, i don' think it is invalid. When i saw a review giving Made in Abyss a 2/10 i was curious about the reasoning behind it, but then i was let down by the lack of effort put into it.

It violates a lot of review guidelines and it will probably be taken down if the admins do their job. You should stop writing reviews until you learn how to express your opinion without sounding like a butthurt fanboy.

Madness17 Aug 4, 2017 5:24 PM
You can have whatever opinion you like but don't express it with a half-assed and dishonest review.