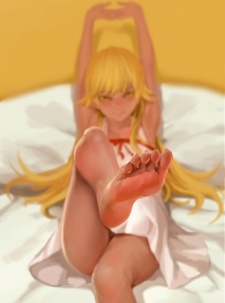 TerrorH3ctor Aug 13, 2015 5:13 PM
Happy birthday, Strykeras. I finally noticed that the girl in your pic is none other than the cute, mysterious Shinobu. Her true form is hot. How you been? I haven't left you a comment in like forever. TerrorH3ctor Aug 16, 2012 5:33 PM
I'm guessing you're in your late teens or 20's if you're busy which I understand. Clannad is short, so don't worry. BUT, I suggest watching the Key Visual-KyoAni trilogy in order 'cause most ppl do the opposite.

-Air (both TV and movie)
-Kanon 2002 and 2006 (if you liked or didn't liked the old version, you'll like the re-make even more)
-Clannad; start with the movie so you get a "sample" of it, then watch the TV series if you liked the movie even a little bit.

The thing is, Clannad borrows a bit of its sister series despite all 3 being different from one another (I don't know where ppl get the idea of them being "similar"). Hope that helps.

TerrorH3ctor Aug 7, 2012 11:16 PM
What's up Strykeras! How have you been? I could be mistaken, but is that a pic of Kyou's ass? She's the hottest babe in Clannad, followed by Tomoyo and that red-head older sister from Sunohara's arc that appeared in that bar. ^^

TerrorH3ctor Oct 8, 2011 6:18 PM
It's cool, don't worry. I'm also having trouble saying hello to everybody due to my busy university schedule.

TerrorH3ctor Aug 13, 2011 12:50 AM
Happy birthday Strykeras! Since you seem to like h-mangas, I recommend one of my favorites "The Tragedy of M".

Sorry I haven't commented you in a whole year. I'm a bad MAL friend! ><
So how have you been? How's Tayutama? I plan on watching it someday.

I watched Azumanga Daioh for the 3rd time and it's brought me closer to the anime than ever.

Oh and I LOVE Black Lagoon. Revy and Roberta are my favorites.