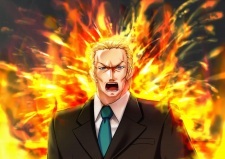 link9us Sep 18, 2021 10:45 PM
The new Legend of heroes: Kuro No kiseki trailer was released and it looks amazing it looks like Kondo finally delivered the style of art he was going for. Perfect for trails to make that jump to the new generation

btw have you heard that ALL the games, including the spin offs are now officially being localized :). I can't tell you how absolutly thrilled I am of this news. I knew Trails eventually would get there with its popularity but we finally will have every game in the series to play.

link9us Aug 18, 2021 3:18 PM
Hey man where you been. Its been quite some time since I chatted to you. I have not heard from you in like months. Alot of things have changed since then and I have so much to catch up on with you. Hit me up when you get the chance. How are things going for you? Any new groundbreaking discoveries with anime or video games recently?

Sacerdotisa Feb 10, 2020 8:30 PM
Thank you very much for the friendship, I also fell in love with violet, each episode was tears xD

Haven't been on 4chan in forever.

And yeup, it is no secret I like mecha. A great genre.

CCA is a damn masterpiece, lol.

Dosantsu Mar 15, 2019 6:35 PM
Yea.
Sometimes when my brother is talking to me and an awesome moment happens I can't hear him.

Dosantsu Mar 14, 2019 1:58 PM
I listen to music when I do mundane chores.
When it comes down to anime I actually have to watch it,just listening to it doesn't do it for me.

Dosantsu Jan 30, 2019 9:17 AM
Well it sure took you some time to watch Re:Zero.
I thought the whole Subaru x Rem fiasco would have made many more people watch it earlier.

Dosantsu Dec 31, 2018 5:25 AM
So say a lot of people.
I kinda didn't know I had to watch it at the very end of season 1.
And it's a mahou shoujo anime so obviously love is always the answer, well at least up till about 2010 when free for all deathmatches solve all problems.
You tend to be a little forgiving with that sort of stuff when you decide to watch older shows.
It's going to help a lot when I finally get around to watching Sailor Moon, I only own seasons 1-3 (The rest haven't been distributed here yet).

Dosantsu Dec 31, 2018 5:22 AM
First and second season were bearable,only watched it for the violence after all.
Hated the protagonist,liked Touka (Weakness for tsunderes and tomboys and all that jazz) but other than the violence and gore I basically yawned through it.
But the third season I couldn't make it past the third episode, I hated all the half ghoul squad and Kaneki's newfound personality.
And because my brother watched it I already knew what happens between Kaneki and Touka.
Honestly I didn't plan on watching them in the first place but when you have as many shows in your personal collection as I do you tend to......stray a little.

Dosantsu Sep 16, 2018 12:28 AM
#1. VNs are a bucket list thing.
Same with Touhou games.
I'm patient, I'm not dying anytime soon.
But yes,most likely I will need to use a VPN.
Same with anime.
Save the insanely dodgy sites,no site (Save the ones that are region locked) has Captain Harlock or Rosario Vampire to watch.


#2. I don't keep up with "New and upcoming releases".
I prefer going backwards rather than forwards.


#3. Funnily enough it didn't use to be my favorite until I watched Toradora.
My previous favorite was Horror,as noted by Elfen Lied.


#5. I've watched pretty much every show at the video store except for the really childish ones.
The older the better,they have the best promo trailers.
I'm so behind on seasons it's not funny.
I do occasionally get recommendations from the guys on /AMP/ too,but it's been a long time since I've gotten one.
Last ones I think were Fruits Basket and Strawberry Panic.
All Comments