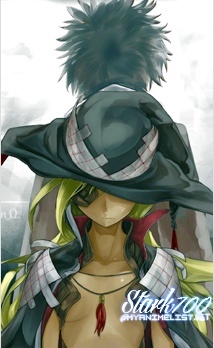 Both series takes place in a fantasy world where there's war and political affairs that divides nations. In addition, the female protagonist from both series share some similarities. There is strategy involved in many of the military conflicts and throughout both series, we see how characters take risks and plans their moves to get advantages. There is also romance although the pacing is rather slow in their story.

In both series, the main protagonists gets dragged in twisted games that can potentially put their lives in danger. There are rules and both series establishes mechanics that makes their games truly dangerous if not followed. Violence exists as well as mature content throughout their storytelling. Recommended for fans interested in a psychological thriller with a twisty plot.

Soul Eater and Sousei no Onmyougi follows a different premise but both unites destiny with the main protagonists. The female protagonist is strong in their story and strives to improve themselves every day. There's also a similar personality with the main male protagonists as they share a complicated relationship with their partners. Both series has a lot of action, supernatural content, and a bit of mystery. There's also background story that connects the characters together. Recommended for fans of supernatural shounen.

In both series, the main protagonists are thrown into a fantasy world where monsters are real and they must fight to survive. The MC develops skills as they unlock new abilities and faces off against deadly foes. Goblins are also a common sight in both series. In essence, their world fiction ties in a lot with fictional fantasy setting. It also contains concepts like medieval weaponry, armor, and other special abilities. Do note that Re:Monster contains more mature content while Hai to Gensou no Grimgar focuses more on relationship dynamics.

In both series, the main protagonist is part of of family generation with connections to supernatural forces. Their life changes drastically after the arrival of a girl as they embarks on their destined role. Both series contains a lot of supernatural phenomenons. As the story progresses, the main characters also gain new abilities to fight against powerful enemies. Both series' past also has strong influences with events in the present so expect the storytelling to have connections with certain characters. Recommended for fans of supernatural shounen.

Spirit Circle and Sengoku Youko follows very different premises but both series highlights their fantasy adventure with a lot of creativity. There are many challenges the characters encounter and they learn many secrets hidden from them. In addition, both series' main protagonist has a connection with the past. The world fiction of both series are also very imaginative with innovative way of storytelling.

Overlord and The New Gate both takes place in fantasy world where the main protagonist encounters many new challenges after being transported. Both series' main protagonist are very powerful as they learn to adapt with their newfound powers. There is decent amount of virtual reality themes in their world and many fantasy elements. In addition, the protagonist develops relationships with other characters with a variety of results.

Created by Yuuji Iwahara, expect quite a bit of similarities from both series. The main male protagonist has a cold personality and often portrayed as a lone wolf to get jobs done. Their job also deals with dangerous individuals as they try to make a difference in their worlds. Both series' fictional world setting also explores individuals with special abilities acquired by mysterious means. There is a decent amount of action with story building. Recommended for fans interested in sci-fi thrillers.

Ubel Blatt and Majeh contains dark fantasy themes as a main protagonist who has developed a reputation in their world. Both series has tons of action and we learn a lot more about their background story later on. The world fiction of both series is also vast and has many supernatural elements that defies the laws of logic.

Dark Air and Ubel Blatt takes place in a fantasy world where there's magic and mysterious powers. The main protagonist possesses unique gifts but finds themselves at odds with powerful enemies that lies in their journey. Their goal differ but both seeks to accomplish what they believe in at no matter the cost after their tragic loss. There is mature content in both series with dark fantasy themes and secrets that waits to be discovered.

Boku Girl and Boku wa Ohime-sama ni Narenai explores youth and romance in a rather unorthodox style. That is, the main protagonist are portrayed as girls despite being genetically born as guys. As such, their appearance is very androgynous that causes complications in the story. There is a lot of comedy in both series and relationship angles. Although in context, Boku Girl has some mature content while Boku wa Ohimesama ni Narenai is focused much more on comedy with little emphasis on a serious plot.

Taking place in a virtual world, both series' main protagonist gets themselves involved in complicated affairs. There's a crossing between the lines of fiction and reality as each chapter reveals more about the fictional world. Both series also adapts sci-fi content with game mechanics that is explained as each chapter progresses.

The story of both series has a slow pace but lot of character growth. From the start, there's a growing chemistry between the main protagonists. The female protagonist is shy but also wants to experience new things in life including love. Their acquaintance with the male protagonist brings out a different side of them as well. Both series has lighthearted comedy and there's evident romance that's explored as the story progresses.

Both series takes place in the fantasy setting. The story of both series follows a different premise but involves choosing a special individual to become a key figure in their world. They also come across dangerous adversaries while fighting for what they believe in. There is ton of action along with tragic drama as the story drags on. Recommended for fans of fantasy and adventure.

Romance and drama are the main highlights of both series especially later on in the story. The main male protagonist gets involved in complicated affairs between multiple female characters. There is a lot of drama as they find themselves getting into trouble with interpersonal affairs. In addition, both series also has a lot of controversy in regards to the relationship dynamics.

Both series appeals to the culinary arts and defines their style through storytelling. There is a variety of dishes and every chapter has innovate ways to make them look good. The main protagonist also has similar personalities and we see how they show their skills in their perspective worlds. Dungeon Meshi is also well known for its fantasy themes while Nobunaga no Chef takes place in a period of historical ages.

Known for their violence and aggressive nature, both series' main protagonist gets involved in complicated affairs with the underworld society. There is plenty of mature content in both series as they take on gangs, mafia, and powerful political figures.

In both series, the main protagonist becomes interested in a sport but starts off as an underdog. They work their way up and faces against skilled teams as they try to prove themselves. There's also similarity between the main protagonists especially in their personalities.

In both series, the main protagonist gets another opportunity to experiment his younger life again. Only this time, they can influence events of the past that greatly affects the future. Both series also has a good amount of relationship dynamics between the main characters. ReLife has much more humor while Boku dake ga Inai Machi presents more of a thriller-style of storytelling.

In both series, the main characters are thrown into a dangerous territory where their lives are at stake. There is violence and bloodshed as we witness how the characters must fight their way in order to survive. Each chapter becomes more gruesome as we see the reality of their newfound lifestyle.

In both series, the main male protagonist are part of a club that gets into very unusual events that pertains to supernatural elements. Both series often creates tension with these unusual events that gets more and more troublesome. There is also an extensive amount of background storytelling (especially in one of the later arcs for Yamada-kun) in both series. Mystery is also presented in peculiar fashion as the readers often wonders about the main female characters' origins. Recommended for fans interested in some mystery fiction with supernatural gags.

Created by the same author, both series has a survival horror vibe with similar artwork. The main protagonist gets involved with very unusual circumstances that has their life in danger. There is plenty of violence, blood, and even death where ordinary people faces extraordinary events. Both series are also infamous for their fan service and plot twist in storytelling.

In both series, the concept of marriage is a prominent theme. The main female protagonist gets involved in an affair that begins with a rocky relationship. However, the connection between the two lead characters grows with each chapter. Both series also has a fair amount of realism such as the characters' occupations. Also, expect some mature content as the story progresses.

Pandora Hearts and Yumekui Merry has a familiar feel with the fantasy world and style. Both series' main female protagonists are very mysterious and has a connection with the main character. Throughout their story, we learn much more about the various organizations and its darker themes. Both series are also known for their supernatural content that highlights unnatural events. Recommended for fans looking for a fantasy-mystery story.

In both series, the main girl gets involved with a popular yet narcissistic guy at school. Their initial encounter doesn't go well as the guy acts arrogant towards her while displaying an aggressive attitude. However as the story progresses, we learn more about the main male protagonist and their personality. There's even a deeper connection that begins to form between the two main characters. Both series are known for their drama and romance. In Takane to Hana, it's portrayed more as comedy while Kyou, Koi wo Hajimemasu is more serious in nature with some mature context.

Taking place in a modern setting, both series deals with bizarre events that surrounds the main protagonist's life as they develop a mysterious power. There is an immense amount of mystery regarding these powers as each chapter reveals darker details about its origins. Both series are infamous for their violence and experimentation concepts as well.

In both series, the main characters gets involved in a survival game where winning or losing determines the fate of their lives. There's a thrilling feeling each chapter that reveals more and more content about the nature of the games. As the characters realize it, they must find out how to survive while battling some of their own personal demons.

Shonan Seven and Sugarless takes place in a school life setting where there are dominant male characters and delinquents. The main character gets into complicated affairs and fights with others. Their presence also triggers rivalries with reputable characters as we see how far they go to prove themselves.

The main male protagonist gets involved in combat sports that tests the limits of their abilities. Starting off as an underdog, they work their way up by fighting against powerful adversaries. Both series holds tournaments as part of its story to introduce new fighters from around the world. And as the story progresses, we learn the various fighting mechanics in both series. Kengan Ashura is infamous for its violence and some mature content. On the other hand, Karate Shoukoushi Kohinata Minoru focuses more on action and storytelling in the ring.