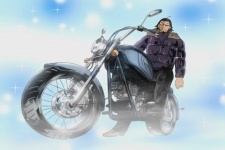 chessmaster1989 Jul 26, 2013 3:31 PM
I really miss Tama, Klaus, and the priest, they were great characters who made a lot of the early gag comedy. I'm not much of a fan of A-tan because it shifted the direction of the manga in a way that I don't like as much. Plus I think the mangaka is going a little too hard on the harem angle.

But it's still generally fun.

chessmaster1989 Sep 17, 2011 3:05 PM
Just finished up SeiZon, it was a little slow at times but really picked up especially in the second half. Plus Mafuyu is pretty awesome. Any idea when season 2 will air?

chessmaster1989 Sep 10, 2011 1:30 PM
This year has had some really great stuff for me, in particular Steins;Gate and Carnival Phantasm (I've also been loving Yuru Yuri... lawl). But it's also had some really disappointing stuff. But the year isn't over yet and as I said there's some really good looking stuff coming up this Fall. I also need to go back through the list of Winter anime and see what there is that I want to check out. Regardless, of stuff on hold alone I'd rather finish Index II, Toradora, and Slayers before BGHK.

B Gata H Kei was alright, had it's funny moments but I'm not all that set on finishing it. Certainly there are other shows I want to watch and other shows on hold I'd like to finish first, and I may never get around to finishing the show. It's a pretty predictable show anyway, and I figure the next 8 episodes are probably mainly going to be awkward ways Takashi and Yamada are interrupted right as they're about to do it.

chessmaster1989 Sep 9, 2011 3:37 PM
Gintama has 201 episodes (not counting the currently airing ones) and Sailor Moon probably has about the same if you count all the seasons, for now the plan though is to just watch the first season and see if I feel like watching more after.

Also, a lot of my currently airing stuff is ending in the next few weeks (6-7 of them) so that'll clear things up a lot, and the remaining currently airing are mostly OVAs that come out fairly infrequently. Of course then there'll be Fall anime and there are quite a few of those I'm interested in, but we'll see how many I watch.

If Seitokai no Ichizon is kind of like HnG S1 I'm definitely going to prioritize it. I also like RPG/gaming parodies (i.e. the ones done in shows like HnG and Gintama) so I'll definitely look into Tower as well. Don't worry though I'll at least check into and watch and episode of everything on that list.

chessmaster1989 Sep 9, 2011 12:43 PM
Awesome thanks man! I've already watched Fumoffu (it was really funny), B Gata H Kei is currently on hold (I'm 4 or 5 episodes in), and I didn't really like Zero no Tsukaima. I will definitely check out the others though (although I didn't have much interest in Lucky Star when I looked into it in the past). Might give Seitokai no Ichizon a try first though because I like comedy/pardoy a good deal.

Although I may not check them out immediately because I just started watching Sailor Moon and am a little embarrassed to say that I'm enjoying it a good deal. :P Well I'll look at their descriptions and if there's one that's 12 episodes that looks pretty good I'll start watching it (don't want to have three medium/long series I'm watching at once since atm I've already got both Sailor Moon and Gintama).

chessmaster1989 Sep 6, 2011 12:27 AM
Hey Sphire I'm looking for a good, funny, not-too-serious already completed anime to watch, can be any genre as long as it's funny and not particularly serious. Preferably something along the lines of Hayate, OreImo, Suzumiya Haruhi, or Yuru Yuri. Any suggestions?

And imo, the sooner they make S3 the better. :P

chessmaster1989 Aug 15, 2011 9:23 PM
That's because the Hina-centric episodes are the best! (especially 13 of season 2, probably my favorite episode (it's the one where Hina realizes she loves Hayate)) I can't wait for the movie, it's just a shame it probably won't get subbed for a few months. Also really hoping for a third season...

chessmaster1989 Aug 12, 2011 6:31 PM
A kind of funny/kind of scary thought, as I was updating anime scores (to be more standardized) and updating my Top Anime (so that HnG and NGE wouldn't clog up all 5 spots >_>), it appears that having watched through both seasons of HnG 3 times, I've spent over 90 hours watching that show. o_O

chessmaster1989 Jul 22, 2011 9:59 AM
So I got finished with the first volume (16 chapters) of School Rumble and I'm liking it so far, so far it's pretty much Harima, Tenma, and to a lesser extent Yakumo who make this series good. But does Karasuma ever become anything besides Bland McBoring? Like seriously he has no personality at all...

Well I do think the Hayate manga has more larger arcs in large part because the anime hasn't gotten to any of the A-tan arcs yet. Up until that point, with the exception of the Hinagiku arc, the Hayate manga and anime are basically entirely short arcs or stand-alone chapters/episodes. Of course there's still quite a bit of character development, but not much in the way of 'plot' per se.

chessmaster1989 Jul 19, 2011 12:45 PM
Hmm I may check out the anime but the thing is I already have two (not currently airing) anime I'm watching, plus a good number of shows I want to watch. On the other hand, I was actually looking for a new manga to read. :P