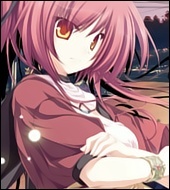 Lessica Jan 23, 2011 4:20 PM
I hope I'm not being rude, but (and I know you haven't been on since sometime last year) I just read your GRZ review and I was kinda annoyed by a certain remark. You claimed that Yomi is a Mio look-alike, but, if anything, Mio is a Yomi look-alike. The GRZ anime aired earlier, and the GR manga began earlier as well.

sirwence Mar 13, 2010 1:03 AM
Good review on bakemonogatari - I was curious how closely the light novels were followed as I have not had my chance to read them yet.

Detective Jan 8, 2010 6:12 AM
I didn't mean anything bad by it. The review was actually pretty good. It's just you opened it with marketing sales, and that's usually how someone who's bragging how "superior" bakemono starts off with.

I read your review and I can't tell whether you're trolling or not. Bakemonogatari is a great anime, but your review reeks of someone who just wiki spammed /a/.