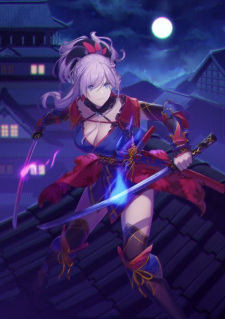 MisoSmart Jul 3, 2017 12:53 AM
Hi there! it's nice to meet you :D I've recently made a new club and I'm looking for new members to join. The club is called "Midnight Snack" and is all about making friends and discussing things. A bunch of activities will be made in the near future when we get more members.

Ikusagami Jul 11, 2013 12:30 PM
Finally got around to looking through your list a bit, since you actually have higher compatibility than most, and I have to ask. . . what's up with giving Aku no Hana a 1?
. . . when it seems you haven't seen a single episode?
That really seems to contradict the stuff you said in your profile.

Not trying to criticize or annoy; you seem intelligent and critical enough to back up your judgments better than *cough* certain *cough* trolls, and I'm seriously curious why you would drop it and rate it so low, given your ethics on giving shows a fair chance.

Ikusagami Jul 2, 2013 9:48 PM
now that I have a little free time to elaborate my applause:
I enjoyed your bizarrely tendentious profile.

I have to remonstrate the whole pejorative "casual" classification you sling around.
Anime is a hobby, like any other. People watch it because they enjoy it (excepting those who do things for [pathetic] social reasons. . .more on that in section 2). Criticizing people who drop shows they don't like is awfully silly; it's analogous to expecting people to remain in abusive relationships. --Mind you, this is coming from somebody who loathes quitting things, and often regrets NOT dropping shows.
Forcing yourself through something you don't enjoy because it MIGHT get better (or for OCD completionism) is no different than forcing yourself through something because it once was better. I don't get the whole "platinum trophy" mentality of turning a hobby into a chore just to say, "hey, look at me! I'm a complete fucking loser! That makes me better than half-losers!"

Your spiel reminds me of a rant I read on Gamefaqs where somebody said that "true gamerz" play excessively difficult games just to prove to other gamers that they are "real" "hardcore" gamers. . . . it sounds utterly ridiculous. People play games because they enjoy them! Not to prove something to others--that would be fucking pathetic! Same goes for anime.
If somebody lacks any semblance of raison d'etre, I can understand an obsessive overattachment to a single form of escapism, but that lack of range isn't healthy.
I personally enjoy anime, games, movies, literature, education, dialogue, sex, martial arts, food, and kittens. If I'm watching a show I don't like it doesn't just present the thought, "I dislike this," but also, "I could be doing something I DO like with this time."
And criticizing someone for having interests outside anime (and finite free time) is, I dare say, the opposite of the norm.

I think you're off on draconismarch as well, despite some very perspicacious observations. Namely, he isn't a "casual" (casualty, maybe), he's a "troll".
A "casual" would not spend more time making videos ranting about anime than he does watching it, and a reviewer, hardcore, casual, whatever, would not aim reviews more at insulting a series' fanbase than offering objective criticism (How many professional reviews do you see in newspapers, magazines, etc. that spend more time insulting the audience than the subject?).
His aim is solely to draw negative attention in an attempt at gaining a semblance of relevance he lacks in "real life," and to draw positive attention from like-minded counterculture adolescent mentalities (a 13-19 yr. virginal demographic [I haven't verified this, but I'd wager money that checking fan profiles would support it]).
He is a sexually stunted closet pedophile sublimating his various neuroses and guilty conscience into attention-seeking, bully, rapist pathology ie. "troll" behavior. It honestly has NOTHING to do with anime.

RyugaHellsing Jul 2, 2013 10:30 AM
i don't agree with everything you said, but your hater rant is entertaining.

Just like how Utsuge means depressing game and just like how Nakige means crying game you get my point.

Also my avatar is also from an eroge I was just forking around.

kitkatxz Jul 2, 2013 12:16 AM
Okay, SAO PREMISE was good, but the way they executed it was pure shit that it made him give it a 1. It's about a life and death situation in a game world. Which does pretty well for the first part of the show then turns into a train wreck, cause they didn't focus on the fucking plot. OH NO WE WILL LOSE ARE LIVES IF WE DIE, WE SHOULD END THIS GAME ASAP wait.... nah let's go relax for a bit while others waste their lives trying to beat the game. Kirito is a shit character he's pretty much Jesus. He is able to everything with asspulls. Loses duel to Kayabe, able to stab him with sword even though he's dead. Can't break through the gates first time, here have my sword and you'll gain this new awesome move out of no where. Asuna was good character cause she out of the cliche MC girl, cause she went into battle knowing the risk. Then turns into a shitty tsundere and the 2nd ark because fucking princess peach. I think the characters and the way they TOLD the story was enough to make him give the show a 1/10. Just Because someone drops animes doesn't neccesary mean they are haters it can mean that the anime just didn't appeal to them.Looking at how non existent is your dropped list you must either be really stubborn or a person who likes any kind of genre.:p

I'ts pretty much impossible for normal people to like anything they pickup so their dropped list will eventually increase the more anime they watch.And why would a normal person finnish something he clearly doesn't like?.I mean when you have finished already more than half of the series and still don't like it or see any reedeming value there is no reason to continue torturing yourself further.Unless of course you are one of those kinda guys who likes to watch animes they hate like some people i know >.>

You don't even need to hate something to drop othertimes people can drop shows because something else seem more interesting and they may even drop shows they liked(I myself frequently do this).Since people have little time and they prefer to watch the best thing they can at the moment for entertainment.

Also you forgot to mention 3 kinds of haters.

One is the guys who hate some animes because they failed to adapt the source material well be it light novels,mangas,visual novels etc. Basically this is mostly apperant with the manga readers that like some manga and then watch the anime version of it and then they start hating it how they left out so many things and completly butchered the whole story.I myself as a visual novel reader hate how studio DEEN has butchered the higurashi anime making it into a mindless gorefest and destroying the non-japanese higurashi fanbase.Well though you can't be harsh on them since it's kinda hard to adapt a god knows how many volumes light novel or a 100+hour count vn like higurashi into a 12 or a 25 episodes seriously so it doesn't come out like some crapfest.

The second type of haters you forgot to mention were the ones that hate animes because of its fandom most generic examples would be how pretty much every non-naruto watcher hates the naruto fandom.This is a case where people hate animes because they hate their fandom and don't understand how people can actually like the anime so the hate is transferred from the fans to the anime itself.This is ofcourse partly the fandoms fault because they can really act like idiots and can't be reasoned with most of the time.

The third type of haters you forgot to mention are the guys who hate animes because of how they influenced the industry or otakus in general.Example include hating lucky stear and k-on for inflcuencing the industry and essentially creating a moe-'boom' that lasted for years.

Also yes most people outside of his 'fandom' realize that DraconishMarch is a huge pretentious-hipster who should be no longer be watching anime since he hates 90% stuff he watches and just spreads the hate.And acts like a dick to everyone who tries to argue with him.I think he dropped shinsekai yori because of that certain little 'yaoi' episode and maybe he has insecurities :p

Who are the 2 other members of the mongrel trinity?:P

I personnaly don't think there is anything wrong with hating on things in general since its just an opinion and ppl have those but that doesn't give them an excuse to be dicks towards other people.Also yes haters tend to influence the ones that are easy to influence resulting in a massive hate-wave on certain series sometimes.

Hating shows just because they are "mainstream" or famous is a stupid thing to do yes and is not a valid arguments.I honestly think they are just mad that their own shows are not mainstream and not everyone praises it.

kitkatxz Jul 1, 2013 12:36 PM
Well, to back up Drac's case he did like Baccano,Madoka,FMA:BH, and Code Geass so he is not a hipster. Second, SAO deserves 1 or 2 imo Plot was shit, characters were shit, only thing good about the show was the art and the sound. K-on yea it's a slice of life but a BORING ONE. All i remember from the show was them drinking tea and eating cake and the opening. He doesn't have a problem with Moe he has a problem with Moeblobs* (characters who are just there to look cute who have no personalities what so-ever), but i will agree with you his patience is not very good he dropped TTGL at episode 8... he didn't even the effects of Kamina's death, i will agree with you on that other then that i have to disagree with you.

AndyRayy Jul 1, 2013 12:30 PM
I love your spiel on DraconisMarch! It pretty much relays my feelings towards the way he blindly judges entire works after watching maybe ten minutes of the first episode (even though he would probably end up really liking them if he just actually watched more than 3% of them).

I love how DM's response to what you said is "GJ-Bu in favorites? That explains everything." lol And he's the one who says that people like to make attacks with irrelevant information (GJ-Bu was fucking awesome by the way).

It figures: he's talking to Vanisher, the same guy who tried to defend DM, but never took the time to respond to my rebuttal against every point he made in defending DM's elitist opinion videos (because he knew I was right).

Anyhow, keep up the awesome~
All Comments