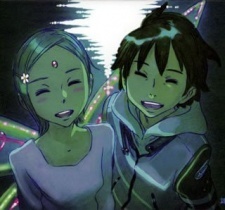 mdchaos Mar 28, 2016 8:09 PM
Thing is with Gurren Lagann, is that I genuinely really like the first half, after kamina's death It really goes downhill.
Simon's uprising felt obnoxious and the show at that point to me was just trying too hard to be over the top.

I can't say I got the ashita no joe reference, as I haven't seen the show yet, but given the amount of nods the show has, it wouldn't surprise me.

I tend to ignore the fans, since letting their hype on my opinion on the show is pretty dumb.

Yeah GGG is pretty great, I guess it more genuine as a super robot show than GL to me that is, Godannar was as well. In all honesty I just think it's alright, it was good for getting me out of my eva depression and it was fun, but after going through getter,dancouga,mazinger,etc, it doesn't really feel that special to me.

When it comes to urubuchi stuff, I kinda want to watch fate/zero since I have a friend who really recommended it to me a while back.

mdchaos Mar 28, 2016 7:14 PM
I kinda wanna give gurren lagann another chance tbh, to see how it holds up for me since I haven't watched in 3 years.

Madoka is pretty high as far as overrated trash is, it's concept of dark storytelling is downright childish, but I guess it worked for a lot of people I guess.

I assume you're the same GVman on twitter right?

You know, it would be much easier to contact me via Facebook! I usually only stop by here to update my list after finishing a series. :P

Dear members of KHR! FC,
it is time for new Tournament to start! Winner of the last tournament was Giotto, Vongola Primo and we congratulate him on winning. But now, it's time to chose Best Arcobaleno! You can already vote in two threads, so please give us your opinion. Vote here: Match 1 & Match 2. :)

There are few more info to share with you. First of all, Katekyo Hitman Reborn! FC needs your help! If you can handle some basic photoshop work and if you have free time, please pay a visit here: Member Card Editors needed!
You will see everything explained in that thread. :)

Also, Katekyo Hitman Reborn! FC got a total makeover in terms of new layout & display picture lately! So please, take a look and tell us your opinion about it. ;)