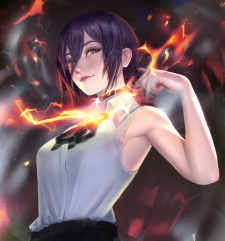 Aleczandxr Jun 9, 5:21 AM
Right now I don't prefer either, they're both awesome characters. I suppose I'll know the answer when I finish the series.

Hellsing Ultimate, Katanagatari (though this one has quite a lot of dialogue), Magi, Megalo Box, Re:Creators, Shingeki no Kyojin, Shingeki no Bahamut, Trigun, Dead Leaves.

Lorenzo May 26, 2018 2:02 PM
I also feel like Part 1 was the worst one, but I still like it. I think it did a fine job establishing the foundation of the entire JoJo storyline.

Avdol wouldn't be so useless if Araki gave him some more screentime. His basically only acomplishment was during the Judgment arc (the one in which he came back), and when he sacrificed himself at the beggining of Vanilla Ice fight. But the same could be said about Kakyoin, he also barely did anything.
Part 3 mostly focused on Jotaro and Polnareff, and somewhat on Joseph. Araki doesn't balance developing his characters too well, unfortunately.

I also love Rohan, he's my 2nd favorite character in all of JoJo, right after Kira.