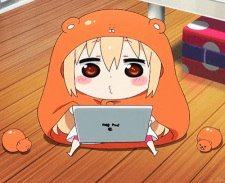 GinZura Jul 23, 2018 11:46 PM
It's nice being able to see what you're watching again (didn't realise how much I missed that Sailor Moon gif until it was gone)!

GinZura Mar 30, 2018 4:26 AM
I couldn't breathe during the Tree of the Heart song, the last episode was as fine a sendoff as I could have hoped for!! I've never wished for a season 2 so badly...

GinZura Mar 12, 2018 7:15 AM
I know I'm the last person who has a right to be suggesting anything, considering how long it takes me to get around to committing to your suggestions, but you HAVE to read Oyasumi Punpun. I've never read a manga that feels so real. Its dark tone is undercut by its somewhat lighthearted exterior. Don't really know how to explain it, but I know you'll love it!

kuuderehime Feb 24, 2018 10:10 AM
Haha I'm behind on some, including Koi wa Ameagari but I'm liking that one too. Citrus of course cos yuri lel
I'm still enjoying mahoutsukai no yome.. theres heaps to like this season but one of my faves is Sora yori mo Tooi Basho, are you watching it? some of it is based in fremantle and its soo realistic!! i felt nostalgic
and yuru camp is rly cute lol

This is the first time in ages im actually trying to keep up to date with the current season but ive finally made time!!

GinZura Feb 16, 2018 9:48 PM
Glad you enjoyed it too! I'd agree that the time skips were confusing at first, and Shun was easily my least-liked of the protagonists. I really liked Satoru though, I thought it was good that he slid into the role of "annoying kid that becomes more sensible as an adult", felt like a realistic evolution.

I thought it was really well-done. I loved how each episode ended on a cliffhanger, and after the somewhat slow beginning, I never once felt like it was dragging. I was initially quite disappointed with the last episode, but now that I've slept on it, I feel like it was a satisfying ending; outside of Saki, the rest of the humans learned absolutely nothing from the whole ordeal, preferring to either conceal or ignore the truth of the Monster Rats.

Also, the sound mixing on the blu rays was so good, so that's a plus! It really made great use of the surround sound.

It's the kind of thing media classes will be writing their essays on in 20 years' time ;)