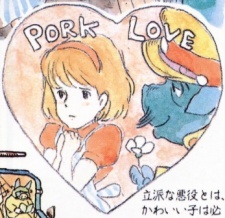 I've trying to catch up to Houkago Play recently. It's a 4-koma manga about a guy gamer and a girl gamer, and their daily lives. Pretty good so far.

Kupopopo Apr 26, 2012 1:41 AM
It seems to have gained quite the fanbase, especially after the anime was released. Of course, it's nowhere near as popular as any of the big three shounen. It does have similiar themes with One Piece though, so fans of FT are usually also fans of OP.

Woah, you read the manga? I wasn't even born at the time the manga was around, lol. I did watch the anime though, and while still pretty cheesy it was fun.

Wow, Saint Seiya. Haven't heard that name in a long ass time. Now that's a true classic, and by that I mean the older one.

Kupopopo Apr 23, 2012 4:00 AM
Would probably reduce the industry to a mush. I guess there'd still be FT around, but that doesn't seem like it's going anywhere.

Sounds good. I should check it out.

Kupopopo Apr 22, 2012 3:12 AM
Not exactly. Rock Lee's thing didn't knock out Bleach, Bleach was ending already on its own. That show just replaced its time slot on TV, instead of leaving that slot open. I'm having fun going through the butthurt Bleachfags going "y is dis shit rplacing bleach baaaww".

Nice to hear Lupin's getting the attention it deserves. Is this a remastering of the old series or an actual sequel though?

Kupopopo Apr 21, 2012 3:29 AM
Yeah, there's a couple of creative things this season. I started watching Gakkatsu and Rock Lee thing. Both are mini-series, something I can chew on till I'm done with this term and can fully watch anime.

GamzeeMakara Aug 2, 2011 6:45 PM
Yeah and I will give you mine since when you sent the letter it kinda confused my parents but anyway
I'm starting school on thursday SO I won't be able to talk to you until the weekend again... ;_;
because I have to go to bed early to get my sleeping schedule straight.
And yeah I will get you some beef jerky but there's actually a lot of different kinds......I guess I can get regular.

GamzeeMakara Jul 29, 2011 5:59 PM
sorry I'm kinda late responding I have been trying to stay up to talk to you on msn but that hasn't been happening because I keep missing you or something.
Anyway I did get your letter a while ago and I need to start writing the response.
oh and I LOVED your letter by the way. A lot.
Also I really don't know what to send in it.
I wanted to send you a bottle of faygo but that really won't fit in an envelope...

GamzeeMakara Jun 25, 2011 9:24 AM
High school math just killed me the first year. It threw me off so bad but I finally get it better. Although maybe it was that I took the longer math class. Anyway it helped. I only failed one test the whole year.
Spanish is easy for me. My mom was so shocked that I had an A in the class at the end of the year, she thought I was going to be bad at it. I do have a hard time speaking spanish but I can understand it and read and write it good. I had to take two foreign language classes to go to a 4 year college although it is good to learn spanish because WELL there's a lot of spanish speakers in the US plus it looks good on job applications and applying for colleges.
My mom told me when I go home I'm going to start applying for colleges and shit. OH BOY!

So how far are you in homestuck and your thoughts so far?

I finally got to play the 3DS at Wal-Mart although the game in there I didn't care much for. And then I saw it again when I went to gamestop to get a game which all I could afford was Dead Space WHICH IS FUN I love it.

Also I don't watch much TV but I've been watching a series on netflix called Doctor Who. It's amazing.

GamzeeMakara Jun 17, 2011 12:15 AM
It's still kinda hard for us to get scholarships if we don't do good. The only thing I have trouble with is math but I've ACTUALLY been doing good in math now. I passed my junior year with an A in math. Whereas my last two years of high school I was barely passing. I donno what it is with math it just gets me. I do so well at everything else except math.
Next year I am going to apply for so many scholarships it isn't even funny. I really need one because my parents are poor my mom always tells me she won't be able to afford sending me to college so I REALLY NEED ONE.


AAH, HOW DID YOU KNOW THAT WAS SUPPOSE TO BE A SECRET?!
No not really buuuut yeah. They do in a way. And it's weird how much I am like the troll that shares my zodiac sign. AND he's so adorable. (and he's not the one I'm using as my profile picture.)
and speaking of that I got some sweet homestuck shirts which I'm sure you know who Jade is? If you do I have her two shirts and one of the troll shirts (which I am getting another one soon and a hoodie and a print) once you get to them I'll tell you whose shirts/hoodie I got. Oh and the print I got has all 4 kids on it, its really cute.

I'm really getting pumped for the 3DS now. I really wanted to get one for my birthday but I ended up getting a new bed because I really needed it my old one took up too much room so I got a futon. So I have to wait until christmas which is okay I can ask for more games now.

I had my guy at lvl 89 in my Persona 4 game because I've beat it so many times and I have so many personae. I still need to beat it on hard mode. I've beaten it on normal all the times I played it.

I only get 20 dollars which isn't much when you think about it but if I save it I can get a game like every month. But since I usually end up spending it that doesn't happen often.
BUT I have a bunch saved up because its summer and I never leave the house sooo....