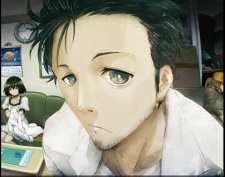 Nervin Dec 23, 2015 1:31 PM
Hello there and thanks for the friend request. I like having a little chat, so don't hesistate on commenting. How did you find me by the way?

MugiIsGoddess Jun 9, 2015 4:37 AM
Yeah, I think that if Light had won, the fans would have gone wild and the series might have ended up being really controversial. Though, if it did end that way, I wouldn't mind too much. Sure, it would send a subliminal message that goes along the lines of "Evil triumphs over good always!", but if it did end that way, then the series would have at least ended on an accomplished note, rather than having an ending as horrible and plot-hole riddled as the real one.

Okay, that's good to hear. I'd hate to see the show's potential go down the drain through filler. However, I'm not so sure that it will even get a new season for a while. J.C Staff is rather infamous for adapting shows, only to never pick them up again after a first season.

MugiIsGoddess Jun 7, 2015 9:30 PM
Yeah, I believe that though both L and Light are awesome in their own ways, it is Light's goals that act as the show's driving force. Okay, that's cool. True, there were a lot of things that went wrong Death Note's 2nd half. Mikami was one of the those mistakes. If I recall correctly there was also that one dude who copied every name on the DN unto a fake notebook using the same handwriting as the original note. I mean wasn't that just a load of nonsense?

To be honest, I didn't like it at first; too much fanservice. But thankfully, it got better as the plot progressed. As a manga reader, do you think that the anime will end in a way that doesn't rely on filler?

No problem, happens to everyone.

So I can see from your profile that you like Light Yagami. That's cool, guess we share a favorite character then. If you don't mind me asking, what is it about him that you find interesting? I like him for his genius-level intelect, his manipilative nature, and his naturally calm demeanor. Majority of Death Note fans like L more, which piques my curiosity to some extent, since I think that Light is the one that carries the show on his back. What's your opinion on this?

ARUNABHA2702 Oct 23, 2014 12:21 AM
Can you also send me a link of that? Something with clear quality. The one I have is horrible. And Gintama is going really well. New chapter of one piece hasn't released yet. I have been eagerly waiting for it.

ARUNABHA2702 Oct 22, 2014 8:46 PM
Do you have any links for ARIA too? I mean for all three seasons as well as the OVA. I have searched everywhere but couldn't find any 720p version. I will be much obliged if you find one for me. This is one of the best anime I have seen so far and all I have got some crap from animeget. Please help..

ARUNABHA2702 Oct 22, 2014 7:30 PM
Thanks for the link. A friend recommended me kissanime and there I saw many animes in high quality. They even have 720p versions of old anime like yu yu hakusho.

ARUNABHA2702 Oct 18, 2014 12:33 AM
Hello, thanks for accepting friend request. Saw your anime list.. Its really long and the rankings are fair..
The Benizakura arc is awesome, can't wait for more episodes regarding Gintoki's past life. The second AMV of Gintama you gave me was awesome..

Have you watched Mahou Shoujo Madoka Magica? Its really really good. I am also posting an AMV of this anime.

It is one of the best AMVs I have watched so far.. But beware this AMV contains serious spoiler... But from this AMV you will be able to easily make out what type of anime this is.. Try out this anime.. I am sure you will like it.. The art is kinda abstract but you will get used to it as the story progresses.. This art is this anime's greatest asset...

Bearbear145 Oct 5, 2014 2:12 AM
I'm reading the manga of deathnote, so I'm gonna finish that first. I'm into romance anime, so any ideas for that genre?
All Comments