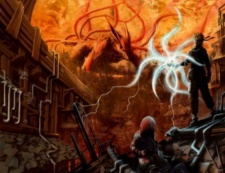 JoshXGahan Jan 3, 7:30 PM
Why are you taking shit about YYH when one of your favorite characters is light from death note, I’ve literally only watched the first episode of YYH and it’s none of those things you said it is already going to be a masterpiece I have a gut feeling in my stomach I know it won’t surpass HXH but I know it’s going to be a MEMORABLE MASTERPIECE

EnigmaOlivia May 18, 2019 3:09 PM
I realize you wrote a YYH review ten years ago and its possible opinions change. However, I will address the intellectual dishonesty, bias, falsehood, and lies your review carries.

Number one you say its a dragon ball clone. Thats odd considering the series nor Yusuke, Kuwabara, Kurama, and Hiei have no similarity in age, past, power, world, or plot, etc. So I would like to know how is it a clone? Are there demons in DBZ? Are there aliens in YYH? Do we have technological advancements in YYH like DBZ? Do we have characters screaming for power ups in YYH? Do we have similar villains? No we don’t so you are one hundred percent wrong and presenting a falsehood.

Number two you say the show is quite trivial at times, to then say it gets good after episode 25, to then say its the most generic shonen you’ve ever watched. So which is it? Your opinions are flippant and do not stay consistent nor do you present examples of this evidence.

Number three you say the series has pointless action. *Spoilers* a central villain kills the leads teacher and best friend. Another villain kills the lead in front of friends. Another villain tries to kill the leads gf. Those aren’t valid reasons to fight nor have action in a series? That makes absolutely no sense and proves you did not watch the show or you did not understand it as you have no evidence nor examples.

Number four you claim the villains and 3 leads, aside from Kurama, are generic. That the leads are slow witted tough guys and the villains are bad for the sake of being bad. Spoilers: Two leads are presented as high schoolers from ghetto neighborhoods with problematic family situations. Psychologically it makes sense why they behave this way. The series shows a natural progression into the two leads taking accountability for what they want out of their lives and to stop being immature kids. The third lead, Hiei, was abandoned and brought into violence as a way of life. It makes sense why he is the way he is and it adds more maturity and depth to the character to see him change. The villains are not bad for the sake of being bad. The villains were once good who became bad do to understandable reasons. They end up accepting their fates and punishments accordingly and proved to be redeemable in the end. In no way are they black and white dull trite villain’s as you claim. The fact that you didn’t logically see this proves you have no clue how to judge anime properly or that your taste is just fairly bad.

Number five you recommend Dragon Ball and Naruto as not only better shows but that they are not generic. When in actuality Naruto copies everything from YYH & HxH. In fact YYH came first so even HxH copies it. Naruto’s main character is Hiei’s past with Kuwabara’s personality. Sasuke is Hiei’s personality, Kuapika’s past, eyes, and steals ALL of Hiei’s powers, charm, and sarcastic edge. Yet you tell people to watch that instead? What kind of anime fan are you to lie and be intellectually dishonest to watch a show that steals nearly all its creativity from a show you claim is “generic” and give a 3/10. Dragon ball being more complex? Yet characters are aliens who look like they are on steroids and have not nearly enough reliability nor charm to YYH characters.

Overall your review is awful and I would delete it as its completely false, serves no meaning as its filled with lies with no evidence no examples to back it up.

Oh. Just noticed this is a dead account. Figures. Can MAL clean this shit up or is it too mainstream for that?

Daroman Mar 22, 2018 12:22 PM
A few comments here dissatisfied with your review on Yu Yu Hakusho. I'd prefer it if people didn't get emotional when people disagree on a piece of media, it's interesting when people deviate from the consensus, so long as they have thought about why they deviate. I wouldn't give it as low of a rating, but for me Yu Yu Hakusho is probably around a 4 or a 5. I'm only 10 episodes in, though.

Garland41 Aug 15, 2011 12:19 PM
No sir I read your Yu Yu hakusho review, and I believe that everyone is entitled to their opinion, but that doesn't mean that I can't disagree with is. Yu Yu hakusho was not made for the story but for the Character development and the comedy between the four main characters.

paradoxjelli Mar 5, 2011 1:19 AM
you have completely missed the point of yu yu hakusho and many points of your review were shallow and did not take a serious look at many aspects of the show. there is so much you overlooked in that series i cant even begin to explain. i dont understand how in the world you gave it a 3...

I have finished the first series. I saw on your list that you have seen all three. I just barely started the second, so..

How did you like the other series? Are they like the first one, or are they worse/better?

Kaiserpingvin Apr 9, 2010 7:06 AM
More like my attention to which comments I have answered and which I have not is... lacking. Pardon.

As for two (or more) popellectuals meeting, that's called the philosophy faculty of Sorbonne.