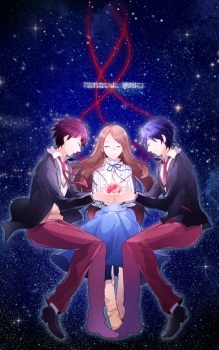 Nick-Knight Jan 13, 2020 4:14 PM
Happy Birthday!
I hope to God you have another amazing and successful year!

I miss talking to you, let's get back to action!!

Let me know your true toughts on'em and please don't go easy on me.

Nick-Knight Jul 12, 2018 9:56 AM
Hey, Nick. I didn't have anything to do so I made some mosaics for you. I'm subsequently going to make to other friends of mine, but for whatever reason it may be I made the first one for you.

Feel free to use it or not.

Notes: I wasn't able to find decent fanarts for Tate, HnS or Mushoku so I skiped them.
The order is clockwise, unlike mine.

Let me know what you think about it, bu-eye.

This is one of the few KyoAni anime I've been hyped to watch. Their new series have been lacking substance so I just ignored them, but this one has a fantastic source material. Apparently KyoAni decided to change the chronology of the story and adapt the first chapter of the second novel first but it doesn't hurt the story too much because it is kind of an episodic one. It's good to know that you've enjoyed it, but be prepared, this is a very emotional and tragic story, now if it'll be just as impactiful as the LN is something only time will tell.

And I've seen that you're watching Violet Evergarden. I've read the first volume of the novel and it was beautiful. So what were your thoughts on the first episode?

I found it pretty weird the speed of the fight seemed like it was at 2x or something so I understand your criticism, and since you spoke about Asuna, I always wanted to ask you: Who is your favorite SAO girl?

TV Tropes managed to get explain my point with a better wording
Designated Hero: Kaori's actions throughout the story are largely built around serving her own dreams and aspirations with little regard for those who stand in her way, or even why they stand in her way. Not only does she pressure Kousei into returning into the world of music despite his very evident trauma revolving around music (and his unresolved familial issues), she lies to him by never once admitting that she crushed on him, all the way to her death, saddling him with a whole 'nother round of emotional trauma. It's downright amazing Kousei was able to survive the rest of the series, with her strangling his neck all the while.

But I did like her as a character, and I do agree with what you said about her, but I truly despise her as a person. Her past? No this part was understandable.

I'm barely watching seasonals, the only one I'm actually caring about is Violet Evergarder which is going to air next season/year, I've read the novel and it was beautiful and it is going to be animated by KyoAni which is an amazing thing, I may not like a lot of their original stories (Free! was obviously the worst) but their animation quality never ceases to amaze me!

Thanks again, and Happy New Year to you!

I finished Kimi no Na wa. (ages ago) and it easily became one of my favorite (original) Anime Movies, even though I was fully aware of everything that was going to happen, because I've read the novel, it still managed to be very impactful and the visuals, as expected, were stunningly beautiful, overall very moving - 9.2/10. What were your thoughts on it?

And I also recently finished Ordinal Scale and Shigatsu and I must say:

Ordinal Scale was a bit of a disappointment to me, the drama was entertaining and the same thing can be said about the marvelous fight/action scenes, but the ending was really messy and Kirito going 'God mode' this time was kind of annoying. The soundtrack was divine, as expected of Yuki Kajiura and the fight against the 100th floor boss was breathtaking and really made raise my score to it - 7/10.

And if you're interested on it and also if you have some free time to read it, there's a side story focusing on Yuna and Eiji set before the events of the movie, so if you want to read it:
http://dreadfuldecoding.blogspot.com.br/p/hopeful-chant.html

Shigatsu was beautiful but weirdly enough it felt more emotional in the manga format for me rather than in the anime, but the latter had a glorious soundtrack and a superb voice acting to make up for it, I feel kind of horrible for not feeling sorry for
Kaori's death, because I hated her, her personality and her actions throughout the whole manga/anime, and even her dying didn't change my opinion about her.
Not trying to pick a fight with you, but I've seen that you have her on your favorites, and I wanted to ask: Do you mind telling me what did you like about her?

P.S. I know that you're busy with college so feel free to answer whenever you want.

Nick-Knight Apr 25, 2017 12:27 PM
I've heard that the visuals were stunning but characters and the plot were kind of weak, judging by the novel these comments seem to be wrong, while the premise is rather generic, 3 chapters in and I'm already in love with this story, every chapter ends with something that makes me want to read more and more of it, and the characters are also extremely likeable, this novel only has 9 chapters so I'm not going to expect a lot of character development from any of them tho. I'm on the part that is revealed that
Mitsuha is "dead"
and dying to see how things are going to end for both of them, I thought that the score for the anime was way too high and I thought that it was undeserving of it, but judging by what I've read so far it was really worth the hype.

Nick-Knight Apr 9, 2017 4:43 PM
That's fine don't mind it, thanks and same to you.
I could swear that you were from Canada but apparently I was wrong. but hey New York that's pretty nice too.

I've seen that you watched Kimi no Na wa. and judging by the score it seems like you enjoyed it a lot, I'm reading the novel and waiting for the HD/Blu-ray version to be released, but what about you what did you think about the movie? Since it was directed by Shinkai I'm pretty sure that the animation must've been divine at the very least.
All Comments