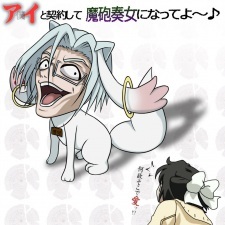 Lolsebca Nov 29, 2021 9:58 PM
To learn another language is a lifelong process, but it also gets easier the more you do it. In my case, I think it's a particularly good investment to learn Japanese, more than German, hence why it takes priority. Meanwhile some less spoken African language that would allow for great advance in ethnography wouldn't interest me. I'm looking for return on investment, and Japan is still the 3rd greatest GDP country in the world (has been since I started learning Japanese, and even before my birth it seems... Development, modernization, economical success: all of this means modernity, and I feel closer to modernity than to traditional societies. I mean, ethnography is still a science, but from a scientifical point of view I'd prefer to study globalization, modernity, postmodernism, the media mix you find in the animanga industrial complex, the cultural production, cultural standardization, feminity, psychology... Ethnography in the case above serves to find the universal or manifestations that stem from the traditional, but I find more relevance to Japan overall.
I produce music more than write about it since I can't hear the notes I'd be writing on a score. I produce on a DAW so on computer. It's been 3 years and I don't know all of music theory but I've come to learn some of it, but honestly speaking I think sound theory matters way more? Like, equalization, reverb, distortion, overdrive, mixing/mastering in space... Music is like writing, it's true, and I like to write quick and short, and do it a lot. That's why my pieces don't excede 5 minutes, generally speaking. With 2 being the average, actually.
Konohana Kitan is one of my favorite anime, and I wrote an article on the manga to share it with French-speaking people. It's a whole mood with the episodic structure, slight cast development, moral teachings, spiritual encounters... I like the part with spirituality and the purity of relationships. But Konohana Kitan is also yuri, so maybe it's that part you didn't like? Feminity has a big part in it, with reifying characters like Ren. Well, pacing ain't that spicy too. It's fine if you want to slow down your heartbeat.
Doga Kobo has some huge variation between visual novel and 4koma manga and normal manga adaptations. But there are a few trends, I guess you probably buy more into the mood found in Doga Kobo's productions after Yuru Yuri (2011)? Because Doga Kobo's comedies have a sort of hectic pacing, not the kind of slow mood you find in Konohana Kitan. In an academic paper, "Le modèle « base de données » d’Hiroki Azuma et sa mise à l’épreuve dans la série d’animation japonaise Lucky Star (2007)", I found that iyashi-kei was also linked to "kuuki-kei" or "atmosphere productions", that aimed to depict life as beautiful with its own rhythm, an attention on ephemeral things and their pleasures and bitterness, mono no aware, all that... Mono no aware is a concept that I believe stems from Buddhism, and if you're aware of the religion/philosophy it's about, you could probably get the slow rhythm. A whole philosophical depth

Lolsebca Nov 28, 2021 12:33 AM
Personally, I find in some scenes that there's a sakuga potential. I mean by that the quality of animation (or micro-animation?).
https://www.sakugabooru.com/post?page=1&tags=sansha_sanyou
I also tried to do some lolicore with a few samples as a private project...
I did watch it in my early weeb life.
Never really outgrew it because I'm planning an article on iyashikei and Doga Kobo.
Truth be told I really rarely (1%) watch anime in a dubbed version. To gain access to the true version, because I already learnt Japanese and because it can strengthen my Japanese, and because it's also the norm to be able to interact with the anime community at large (Japan and the West and South-East Asia maybe?)

Vogel100 Nov 16, 2021 11:02 AM
Good stuff indeed. Reiji's episode was a surprisingly dark episode when watching the anime (when reading the manga I already knew it was coming so it wasn't a surprise anymore). I don't worry about people dying as much myself, I'm not the type to worry too much about what may happen in the future in general. But I found the effect it had on Reiji really interesting, how the trauma caused him to end up directing those feelings at Rin and becoming what he hated. Well, at least in the anime, in the manga he possibly became worse in a different way as it goes more into his relationship with Rin.

Kodomo no Jikan is pretty much the only story I've found that handles age gap romance really well, other stories usually either don't take it seriously or I don't really agree with them. Not that I mind, I like lolis in general so it doesn't need to be taken seriously for me, but KnJ is something special for sure.

PS: Makes sense, I rarely post so usually I am hidden in the shadows. Just figured I had to leave a comment for someone who also loved magical girl shows and Yama no Susume and who had a rating system that was similar to mine in some ways.

GoddessHell Aug 30, 2021 6:31 AM
No but I like sadists anime boys and dramas( Korean, Japanese ,Chinese , Thai, Taiwanese,)
I loved Sansha Sanyou as well

steelrain Jun 10, 2021 5:16 PM
It was pretty good, I liked how they reused most of the voice cast from Ro Kyu Bu! I enjoyed Yuka Iguchi's character saying "Hibiki" way too much, haha

nDroae Jan 12, 2021 8:19 PM
I had a time watching it...
Likewise, I also had a time watching it :) It was pretty unique. I CANNOT get Bajar and Anise_Punter to watch it, even though they loved the Cartado episode and the "mumumumumu" song. Not that I think they'd like Pop in Q, but it's something moe fans should be aware of.

Ashhk Jan 6, 2021 4:36 AM
Ah I see, I really hope that they'll continue it so they can eventually make a 2nd season, it would be great to be honest