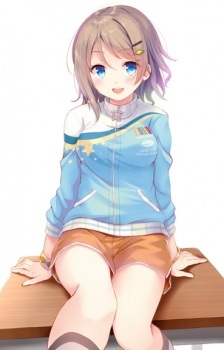 AndyhawkZ Jan 21, 7:37 PM
I finished watching very good dude now I have to see the movie, which anime did you have the most fun watching?

AndyhawkZ Jan 20, 3:30 AM
interesting xD Saskatchewan hmm, I saw that you have Madoka on favorites, I started watching ^^

AndyhawkZ Jan 18, 2:13 PM
Is good to hear that ^^ Now that I realized that you are also from Canada lol what city are you from?

AndyhawkZ Jan 5, 5:19 PM
No problem dude, thanks how was your new year?

Well, I can't say anything without having seen your art, but people are often their own harshest critic and in turn, often too nice when it comes to evaluate the work of someone else. My art objectively sucks, though, since my hands aren't capable to realize what I'm imagining in my mind.

Designing and playing your own virtual character sounds interesting. ^^
Wasn't "Unity" also the name of some game engine?
Good drawing programs on 2D screens already use up lots of resources. Now imagine having a virtual, 3D environment to design stuff

However, wouldn't you say that a picture says more than a 1000 words? For example, I have no idea what you mean with "khebergaW".

Lita is "lita426t", right? Also, do you know her in person or only as a fan? In any case, it must feel great to feel appreciated by someone you admire :)

Do you draw yourself?

I'm not that passionate about arts, but I do enjoy still lives and realistic depictions. What type of art do you watch?

Do you use your phone for browsing? If so, I can imagine how tedious it must be to copy-paste anything...

I recall having used https://kotobank.jp/ to look up Japanese words because it has been recommended by my Japanese teacher when I was studying Japanese (guide)

Oh yeah, you mentioned you used Aniki. Can't you somewhat just copy the kanji with their meanings and stroke orders from there?

Did you manage to learn Japanese?

Noboru Sep 28, 2018 1:10 PM
2010 feels like it happened yesterday to me. If only I had started to learn Japanese for real, I would have been able to read in Japanese by now.
Could it have been Aniki? I haven't tested it myself, but I've heard lots of good things about it. I also have a physical flashcard set, but I haven't used it much.

Noboru Sep 27, 2018 2:57 PM
Oh, I think VNReader was the advance from TA insofar that the text could be placed directly on screen. I've never tried it out, though.

So you're fluent enough in Japanese that you can read without those tools? How long did you learn to manage that, if you can?
All Comments