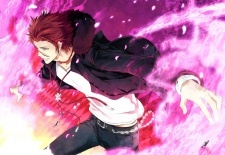 link9us Jun 3, 2016 8:05 AM
One of the things I can say I guess is that in many shows, some times villains are not just one sided archetypes, there treated as sort of "individual characters" in a story line and thus have more humanistic traits to them. In other words you don't just look at as yin and yang, from a physiological point of view. You look at them as just another character that could possibly change in multiple ways. I think this is probably one of naruto's greatest strengths despite all its flaws and being able to execute it flawlessly, which yeah kishimoto really failed at lol. But this was clearly evident in Naruto, even more so in Hxh and yes one piece for sure excels at this.

But i really can't say the same about fairy tail. He puts alot of attention into the main characters, but i wish he would equally treat the villains like actual "humanized characters" in the story and not just another rpg baddy.

To many 1v1 battles, but for the most part there pretty genric one sided battles really. There is a few close encounters and some even sacrifices which ultimately game the impression that some of the enemies always raised the stakes further as the story progressed.

I think honestly fairy tail could have been much greater if it focused alot more on deeper characterization and development on some of the enemies. I mean granted there are some like zeref and the dragons being the most developed. Then there is Jellal which started off as a villain but eventually changed through out the show and see that growth, that change, his goals seemingly being altered. That imo is what good writing is for characters. But to be fair there is just way to many one sided encounters in this series kind of like bleach with the arancar saga.

That is kind of my one real grip bout it and when compared to other shonen series. Like even FMA or yu yu hakusho, hell some of the older classics have far more well developed enemies like Toguro or Merum from Hxh, and in one piece case, the author loves ALL his characters so even side characters that shouldn't get enough attention actually does.

Many characters are conveyed to where you really connected to them on even an evotional level and even in some ways you might think of them eventually changing there ways and hoping that they would join the straw hats at some point in time. Or you might think of then as a fearsome deranged physopath, then even hearilng the names sends jitters down your spine cause of the past experiences of what that character did and knowing that also makes them even more sinister.

To me that is considered really thought-out and planned writing, not just for the protagonists or the straw hat crew members but all the excess villains introduced and even side actors. To be able to have an emotional connection to these characters, that's amazing. Can I say the same bout fairy tails villians. No not really. I could give a hoots ass if they die because the writer doesn't really make you connect with these characters that well and doesn't really make you care bout them. Its just like there there as a wall to be torned down. This is kind of the same way I felt bout bleach as well. During the early arcs where the Gotusei 13 were considered the emeinent threat against ichigo and his allies. I really enjoyed that and seeing each and every one of gotei 13 and there back stories, there pasts and what sort of different ambitious goals they had against and how these motives were changed based on ichigo and his actions.

Where as the arancar saga introduced just alot of unecessary bouts that didn't really ammount to much even so some of the espada's got a substantial ammount of development, although not a whole alot. Just a little bit adds to the character and makes them seem like a larger part of the universe and conflict taking place. The same can even said bout FMA. Many of the humuncoli, undergone quite alot of development before they met there demise, to the point of where you actually new these characters inside and out.

This is honestly something that hiro mashima really fails at as a writer imo and one of the biggest flaws of fairy tail.