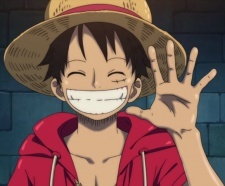 RyokoAyekaLover Mar 11, 2014 7:50 AM
but the world being destroyed or atleast in utter chaos was all part of the extra despair since it was hell outside of the school and thus making the horrible school life actually seems safer making it a lose lose situation.monokuma never broke the rules though up untill the Mukuro Ikusaba trial but that was just so he could get rid of Kyoko for exploring areas she shouldn't have but since she didn't break the rules he couldn't kill her and since this was more so a TV program to cause despair to all those outside watching he couldn't have Kyoko snooping around and learning to much before the end of the game otherwise it would defeat the point of the program lol.huh? but all the students were present just Mukuro Ikusaba was disguised as Junko and Junko was present as Monokuma so technically speaking all the students where around for the class trials lol.lets see what i got lol.

1.)Eyeshield 21 a sport anime but its also a Jump anime so while different it should still have a sense of familiarity that will ease you into the genre.

2.)Kaiji is kinda hard to explain besides simply saying its a anime with the theme of gambling and they have some very weird gambles making it interesting so for the most part it won't ever be games you will see at a casino lol.

3.)Panty & Stocking with Garterbelt is a wacky comedy with a more cartoon-ish vibe

4.)You're Under Arrest is a police anime and is one of the most recognizable of the genre

5.)Yuyushiki is a slice of life comedy with cute girls doing cute things

RyokoAyekaLover Mar 9, 2014 12:18 PM
what are you considering to be holes? cause there is a chance you just didn't understand whatever or missed it since it is a type your not used to watching. no problem though its not like i exactly recommended Danganronpa lol. its okay about the deletion but try not to do that again lol...thats how i know what to write back cause i use the "com-to-com" function to see the entire conversation lol. it is good your liking Inuyasha so far as well ^^

personally my favorite out of those is probably Inuyasha then followed by D.Gray Man though if that helps you narrow it down some more any lol.