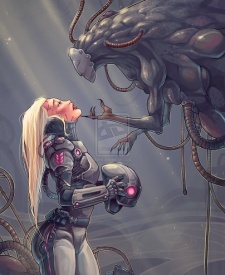 Luna Dec 26, 2013 11:24 PM
Hi and welcome to the 20+ club!
If you like you can introduce yourself here, so our other members can welcome you too! The club also offers a lot of interesting and fun threads, make sure to check them out.
Hope to see you there! :)

KingsofLeon Nov 24, 2013 6:45 PM
Awesome! I'm glad I could help. Pandora Hearts is definitely tricky (the manga anyway), it can get very confusing at times and there's flashbacks every now and then. Still a great story.

KingsofLeon Nov 20, 2013 1:58 PM
Haha, you've already seen SnK, which is really similar to Claymore. Hmm...I'd really recommend reading Berserk since it has a better (and much darker) storyline, well defined characters, and the fact that parts of Claymore are influenced by Berserk.

If you don't want to read it (you really should!!) I'd recommend watching the anime even though it is dated, it's still very good and may force you to read the manga later lol

Other than that...I'd go with Pandora Hearts (medieval setting) because it has sub plots like Claymore and things get revealed slowly over time.

Freezing is good too, not the anime though from what I hear. I would recommend the manga, it's enjoyable, but the main opponents aren't nearly as scary as the youma in Claymore.

Basilisk is great, very dark and lots of gore. If you're into that part of Claymore then you might want to check it out haha! That's all I can come up with, let me know what you think