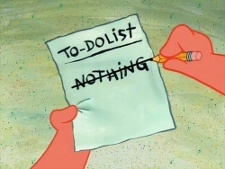 Well, I hope you didn’t die and you just got tired of anime.

About Aoba... I think I don't get him anymore. I thought he had an aspiration of being a grey cardinal himself, his manipulation of Blue Squares via his brother proved that he prefers that style of manipulation to being a leader in public. But right now he just plays a second fiddle. What does he get out of this arrangement?

So, if he can't be a manipilator in the shadows now, what's his goal? For a while I thought that he wanted to "promote" Blue Squares to the most powerful "sub-clan" in the Dollars and then claim himself to be the leader of the Dollars. Noone would know better, Mikado's identity is a secret, after all. Aoba even attempted to put Celty in the forefront to make their group more popular among the other Dollars members. I thought that he was the one to put out Kadota specificall for this occasion. But I'm not sure, there's nothing to suggest for sure that taking over Mikado's position and status is his plan.

I know one thing: the whole gangwar thing is the most interesting subplot in DRRR for me now. Saika sisters, etc.? Ridiculous and insignificant.

What puzzles me so far is Izaya's interaction with Mikado in ep.3. Why was Izaya so ecstatic that Mikado hasn't changed at all? I just don't get Izaya anymore. The only tentative theory I've got is that Izaya enjoys it when his predictions are wrong. He predicted Mikado to be swayed by all that happened into changing, but Mikado is still the same, and Izaya is delighted that someone didn't conform to his expectations. That must be very exciting for him, an unpredictable element in the plot. That said, Izaya has a strange fixation on "normality" and hates Shizuo and Saika for being "abnormal", which I never understood (b/c let's face it, Izaya himself isn't normal, he's just blind to it!). So I thought, maybe he likes Mikado's normality? If that is the case, then he lost me, I absolutely don't get him.

Mikado... I think I get Mikado, he's not the kind of guy who can be a public leader, he's too shy for that and he lacks charisma but he's intelligent, so he enjoys being in the thick of things while staying in the shadows. He doesn't really want to be a passive observer, I think, but he wants to create a stir while in the shadows rather than in the open. Kinda like Izaya himself, but for entirely different reasons. A grey cardinal of thoughts is the role that suits him best, and I think he finally realized it, after dreaming of change and of being in the spotlight. And I imagine that he's completely at peace with his role, being a grey cardinal can make one feel very powerful and cunning, moreso than even being a public leader.

Are you still interested in simulwatching Code Geass? You haven't been around for quite awhile now.

The development with Kallen was pretty lackluster. You generally can't introduce characters and relationship attachments and expect any development with them to have impact within a single episode. At that, I thought her attitude toward her mother was really stupid in the first place, even if we blame it on teenage nonsense. It was extremely obvious that the mother was staying there for Kallen long before her epiphany.

The school stuff and random action wasn't much better. I did like the conversations between Lelouch and Suzaku, as well as the one with Lelouch and Kallen. I think these episode would be a lot better if they would just focus on the main plot with Zero rather than all this other stuff. The writing for everything else is pretty bland, and seems outright bad when placed side-by-side with the much better developments, suspense, and action present whenever the main plot moves forward.

At least we did get a bit more insight into Japan's state for the Japanese.

TripleSRank Aug 29, 2015 8:13 PM
I figured it was to erase the evidence he left behind. Discovering that the leaders of the Japanese liberation group all killed themselves would raise some questions, I think. Still, he revealed what happened to Euphie, so that theory may or may not end up being true. I wonder what happened with their conversation.

I think he could be driven by justice; that is, I think his feelings could develop into such a goal. However, at the same time I too think he's far too personally attached to the situation, which could prevent him from seeing clearly and eventually lead him into being just as unjust as the people he's fighting. (This is assuming that he does have a sense of justice that is driving him. It could all be emotions, as you said.) It would be all too easy for him to veer off course.

Well, I don't think waiting longer to use the explosives would have been a good idea consider that the building was indeed going down. There's no reason for us to assume he had foreknowledge of when (or even if) the building's foundation would be destroyed.

I think the conflict between justice and revenge could definitely come into play in the future. I do think it's noteworthy that Lelouch had an ulterior motive for saving the hostages (his classmates), so it's hard to say which he leans more heavily toward at this point.

This is an interesting development even apart from Lelouch's internal conflicts. By announcing this "Order of the Black Knights", he has essentially placed himself in the role of policing the war(s) between Britannia and the countries it governs. That's not certain to lead to Britannia's downfall or even its loss of Japan, however, so I wonder how that will play into Lelouch's overall goal.

ClinT Aug 28, 2015 12:41 AM
just asking too
but if you had to gave a rate to cg right now, what rate it would have ?
also, why you and SSS are tooking so long to finish it ?
and how is Overlord, kinda excited to watch