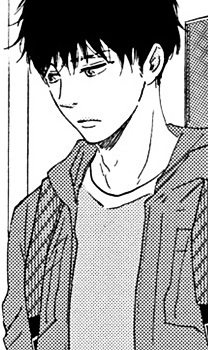 Sonal1988 Dec 4, 2018 7:13 AM
OMG that's the one where all the brothers are gay haha. And they all look like each other, esp the blonds. Dang, I had a hard time following the manga bc of the mangaka's art.

I guess you can say i am bold and brash

my spongebob jokes are shit

Zwifirtyy Dec 29, 2016 6:07 AM
I agree, there's nothing in common between No.6 and Yuri on Ice (besides lgbt couple of course), but the two are super shows, even though I prefer No.6 (I prefer the manga to the anime, the animation in the anime is okay but the art in the manga is absolutely magnificent, the emotions on the characters' faces are well drawn and expressive).

My favourite scene is when Yukina kisses Kisa under the sketchbook (if my memory is good, I think it's ther first kiss, isn't it ?). But that scene, when Yukina slaps Kisa was funny :D Fortunately, Yukina was coming before Kisa was kissing the other dude, I was like "no don't kiss him, I'm begging you don't kiss this a**hole it will break your relationship with the handsome Yukina" (yes for me kissing is cheating).

Kirschblüte ? Isn't that a novel (I'm too lazy to check xD) ? Now you're saying that, I've never noticed that there's no kiss in Ten Count :o I hope it will have a cute kiss between Shirotani x Kurose (idk why I'm expecting a cute kiss in a smut story xD) ^^

Hmmm... I prefer yaoi/shounen-ai mangas to yaoi/shounen-ai animes. But I love Doukyuusei. The relationship between the two protagonists is so sweet, cute and pure, the artstyle is unique and beautiful and Hiroshi Kamiya aka my favourite seiyuu voiced Kusakabe, the main character. Have you seen it ? Besides Doukyuusei, I like Sekaiichi Hatsukoi and Hybrid Child.

But my favourite yaoi/shounen-ai manga of all time is Yozora no Sumikko de by Nojiko Hayakawa.

The story focus on two adults,Hoshino, a teacher and Sudou, a worker in whatever (I don't remember x)). It's been a long time since they haven't seen eachother (they were in the same astronomy club in high school), but brutally meet and Sudou say "I would have prefered to never meet you". Here it is for the little synopsis.

The story doesn't focus on the love relationshp between Hoshino and Sudou, but also on the relationship between Sudou and his son. Not many mangas focus on M/M love and son/father relationship. The story is beautiful, it is poetically written, the characters are well written and have a good development and the art is magnificent. It looks like a sketchbook, maybe you won't like it if sketchbook style isn't your cup of tea but personnally I love this kind of artstyle. This a cute and lovely love story, and it's completely fluff !

Well, I said in my description I love boys' love, it's not false but it's not true either. I love shounen-ai, not yaoi. Weeeeeell, it was out of the subject xD My other favourites are Himadari ga kikoeru, Only the flower knows, Seven Days (in fact, I'm currently watching the live action movie), and No.6 ^-^

I LOVE SEKAIICHI HATSUKOI ! My favourite couple is Yukina x Kisa, their relationship is so sweet !

I liked the way Atsuko Asano builed the characters, the mystery was great and I love the kuro-shiro dynamic. The way they means a lot for eachother, they can change eachother even though they're completely different was really a thing that I appreciated.

Despite Love Stage, I don't even know the mangas that you've listed, shame on me x) What are they about ?

The art of Ten Count is magnificent (Takarai-sensei is a very skilled artist), the plot was interesting (I mean how can you make sex scenes when one the characters is mysophic ?) but it became ordinary. But I like the drama part, even if I prefer comedy to drama ^^'

Hibbington Oct 31, 2016 7:15 AM
Greetings RisuSaya, I saw that you were watching a few seasonal shows.
We are entering the middle part of the season and at the Anime Guild our main specialization is being a Seasonal Club.
We choose the best Opening, Ending, Character and of course Anime of the Season with also a Review Section and a Power Ranking Group
If that seems appealing to you, we currently are featuring our OP Contest and Mid-Season Review Event.
I have already sent an invite as well as provide a link to our club ^.^ - http://myanimelist.net/clubs.php?cid=63899