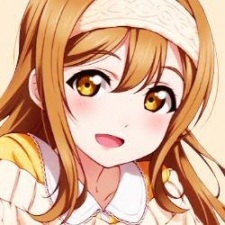 Magipyuri Dec 28, 2016 12:48 PM
But dear Kitteh, you have followed me willingly into the depths of anime ranking :PP

It's nice when people say that on your birthday... even though you don't know each other and have never met at all before ever and it's kinda creepy and totally awkward ._.

SageShinigami Nov 12, 2009 11:38 AM
Well they eventually got rid of her (or at least, took her out of the main story) so she wasn't so bad. This girl's still hanging around though, and the show is worse for it.

SageShinigami Oct 8, 2009 9:01 PM
LOL, yeah me either. I forget about this place sometimes, except when I watch a new anime or something.

I thought Decade needed some work too. I was really angry about it at first, because they replaced the actors *and* placed them in different universes (one was okay, but both??), but eventually I got over that and some parts were really good. I particularly enjoyed all the worlds they went to after they were done with the 9 Rider Worlds.

I've watched...2 episodes of W. So far? Its...good. Its really great, but I have to downgrade it due to the annoying "landlord" character who's really just irritating rather than providing comedic relief.

ZAKURO_ Jul 6, 2009 2:22 AM
Here's your Natsuhi Ushiromiya Fanclub member card~
Please, save it and upload it in your own image host! Definitely, I look through Umineko fanart often and there's barely any fanart of her. ;_; I save all I can, though. >_>

lovesign Feb 14, 2009 6:08 PM
Ahh I know. She's too awesome to have this few amount of fans. :( I actually think she was my first favorite when I started Umineko, lol.

There needs to be more of them. :(

Niacinamide Feb 4, 2009 9:41 PM
Yeah, that'll probably investigated more. Atleast, hopefully. It would be cool if Natsuhi showed some really awesome powers or something.
:D
All Comments