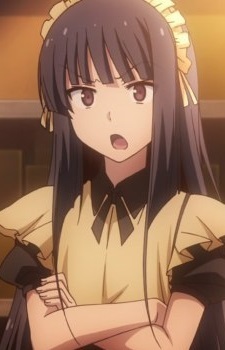 Interesting MAL description. So let me try and answer your question. I guess the "am" from "I am" means "I exist" or "I find myself"? Though it isn't quite accurate either in all cases; it's quite the conundrum..Deep though seeing that's the first thing most of us say upon introducing ourselves. Definitely the first thing that came to mind.

superficial Sep 21, 2016 3:24 PM
Alexandroid, what a coincidence.
I just got some of my shit together yesterday - I'm sorry for using that expression. let me elaborate elsewhere. ,_,
So i decided to log in to MAL. and here you are.

I know my message was sudden & unexpected.

you can take as loooooong as you wish, to respond. We have a lot to discuss

superficial Jan 6, 2016 1:42 PM
I have noticed that as I became older ((not that I'm an old oba-chan now but you know what I mean))
or perhaps I should say when I was younger and less aware of matters. and more passive and quite unaware of crap (you ought to know by now that crap is a very universal word for me). I enjoyed every genre of media. I don't mean to say that anyone who does is an idiot. my formation into what I am today included the gradual change of interests in terms of genre ― what I allow my mind to be conditioned by subconsciously.
this is essentially because I'm picky with what I like. and I have a short attention span so if I dedicated myself to watching each genre then I would not know where to start. another factor: time. it's simply time consuming to watch a little bit of everything if you don't genuinely enjoy it. to achieve emotional peace within yourself, you cannot go against your desire to pursue a certain objective. for me that was to focus only on genres I actually enjoy rather than staying enslaved and entertaining myself with stuff others have recommended me while I don't actually enjoy it.
this kind of hurt my perfectionism since I like to finish what I've started so my initial aim was to finish all the anime I don't like. but then I decided to just leave it incompleted.
okay, I'm sorry for waffling so much again <_< I type too much crap.

it's nice you watch Shiki for the horror effect. I also would like to.

Sikasklud Jan 4, 2016 9:16 PM
"That is a thing and something that I like to be aware of, that everyone's ideas and opinions much differs from one another, although sometimes to me they may seem all the same." Well, You're right. Everyone have their ideas and opinion each other, including myself.


Ok, i understand what you mean so far. Hachiman Don't really need attention from us. However, We can still respect him. So, doesn't matter if Hachiman is getting more attention or not.We can't force everyone to attentively him because everyone have their opinion.Because Hachiman is a character that don't really need our attention at all (and that's why i like him).

P.s:
"I have never revealed this to anyone yet, but I am secretly a Hachiman "fan" as its called but not just that."
So, why do you revealed this to me? I mean, don't get it wrong. but we just became friends a while ago so we isn't really know each other.

superficial Jan 4, 2016 10:32 AM
I really enjoyed Soredemo Sekai wa Utsukushii.
main reason: the difference in age and height for the couple was reversed, the girl being older. it defies traditional beliefs of the man having to be older and taller.
I found their romance cute but nowadays I'm not looking into watching romance anime..
you know I hardly watch anime anymore. if I watch something I'd like it to be action, not lovey dovey things.
after Mawaru, I'm going to watch Cowboy Bebop.
All Comments