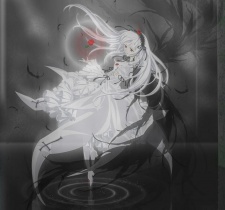 NinaWolken Jul 8, 2009 7:26 AM
Hi Napal',
I'm at work right now, but since I've some time to spare I thought I would use it to reply to your (fairly long) message.
First : I love Noodle Fighter (lets go with the English name since it's the one used for the manga in our country). That's such a crazy serie. The heroine is fabulous in her own way (I kinda love violent character as you can see ;). But I prefer the paper version compare to teh TV one. Like you I saw the first 2 ep during the JE some years ago, but that was not that impressive IMO. ITOH, each books made me laugh like a madwoman =3.
As for Canaan, I understand your choice and will try not to talk too much about it anymore. I tend to watch most of the series I'm interested in every week because I don't want to be spoiled by anyone (and I'm not particularly patient anyway), but I'm also able to wait very long (like for Higurashi or TTGL) until the series are released in DVD here before even watching one single episode, that way I'm sure to buy the dvd and fully enjoy the show. I wanted to do the same with FSN, but the dvd never came orz. In the end I never watched it >_>"... Nor did I get spoiled, lucky me!

As for where does Canaan come from, I'm not quite sure. I know the show is based on a game developped for Wii, but I don't think it's from Type-Moon... I can't check it right now, but since I don't see even one guy who could take the lead in the serie (so far), I doubt it's from an ero-game originally. Still, the chara' design is very close from the Tsukihime one, which confused me at first. But even the studio producing the show is different : this time it's the one that worked on True Tears.
I will confirm that when I came back tonight. I should also finish Sengoku Basara tonight :-].

Well, I'm going back to work now. Hope the Otaku's God is still watching upon you (as for myself, I only believe in the great Tempus Spatium).
Have a nice day! ^^/

NinaWolken Jul 6, 2009 4:03 PM
Hi Napalmitos (such a strage name btw, I'd like to know where that comes from ^^"). That was great to meet you during the convention... and see you again... and again XD. That's kinda crzay to think that we bump several time in each other when you know that there was something like 200 k people attending (dixit LCI).
I watched Canaan yesterday when I came back, I'm not sure I can find the correct word to descibe my first impression : marvelous? incredible? perfect?
Ok, one souldn't judge a serie by it's first ep only, but this one was just great. Not even one remark I could make u_u'. It seems like it won't be long before we got it licenced in France though, since it was projected during the JE, that's good to know :3.
You can reply in French if you feel like it, I'm just practicing my (shitty) English here orz.
Have a nice... night :).