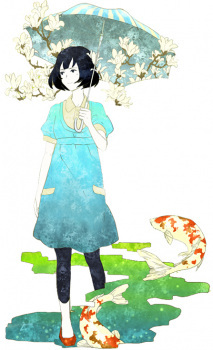 Sunroge Jun 14, 2:11 AM
This site became a better place after you left. Thanks and goodbye.

WeeabooColin Jul 5, 2018 2:35 PM
It's pretty garbage to be honest, I may transfer my shit to AniList but I'm not sure if I will. If the features are fully restored in like a week, I don't think I will. But if not, I'm switching over.

WeeabooColin Jul 5, 2018 2:31 PM
I like a lot of features of anilist more, like the ability to change the rating formats. But I am still attached to MAL for some reason, maybe it is because all of my friends are here. But the MALpocalypse was pretty garbage.

WeeabooColin Jul 5, 2018 12:30 PM
Okay good, it may be my favorite anime of all time. It is at least the best conclusion of all time. If you had to give Aria a score at the moment, what would it be?

WeeabooColin Jul 5, 2018 12:22 PM
Yeah you are pretty right, but in my head, I feel like media would be better if more people were critical. I like to consider myself an optimist in that regard.

WeeabooColin Jul 5, 2018 12:04 PM
It would just be nice if people put more thoughts in their opinions in general, I am not saying that people can't do things for fun, but it would be nice if the consumption of media became more thoughtful in general.

WeeabooColin Jul 5, 2018 11:57 AM
How is being critical a hard task? Sure there are people that dedicate there lives to being critical, but at the same time, if the bar for being critical, is thinking about something, I hardly think that it could be argued that some people can't be critical because they are too busy. I am not asking for anyone to dedicate their lives to writing long reviews or discussing the merits of art for hours, all I want is for people to be more conscious of what they watch. I don't care if people watch things just for fun, that is what I do. Also why are you complicating my wishes for supposed actions? I said I wish more people would be more critical of what they watch, I am not going to go up to people and be like "Yo man, I expect a 30 page long dissertation on the merits of ____ by Thursday." Also what do you think of the supernatural elements of Aria that is being introduced in Aria the Natural?

WeeabooColin Jul 5, 2018 11:41 AM
But in general, I do want people to be more critical of what they watch than what we have at the moment.

WeeabooColin Jul 5, 2018 11:39 AM
I mean that is what I am trying to do, I wrote a 10'000+ word review of BnHA that talks about the strengths of multiple series and attempts to argue the merits of those series. I am also an autist so I argued my point in the most autistic way.

WeeabooColin Jul 5, 2018 11:30 AM
I have actually suggested BnHA to many normies in the past, and it's always been mixed. Some people become anime fans, where others just assumed that BnHA is the best anime there is and then deduced that anime isn't there thing because of that. So personally, I think the anime community would be a better place if there were more contrarian fucks like myself.

WeeabooColin Jul 5, 2018 11:25 AM
I don't necessarily think that's the case either, SAO factually did become less beloved after Digibro made his hour long video on the series. It is true that a lot of his fans are pretty mindless, but many of SAO's fans would concede to a lot of the points he made. Fairy Tail was pretty well liked when it was first beginning, but through ruthless criticism and backlash from a small minority, the show is now widely considered to be trash. Naruto also suffered a similar treatment. I don't think that BnHA will be considered to be the best shounen of all time because of two reasons: The first of which, is that there is more negative reviews on the MAL page than for the last two seasons. Secondly, every consecutive season is becoming less popular than the last (this happens with every sequel but the increase in negative response to the series is at least a sign of a change).

You count Avatar as a anime?

By the way, I don't necessarily think it is a bad goal. I don't know what your opinions on BnHA are, but I feel like there could be a really good argument over the merit of shounen anime if more people disliked the series. The anime communities atmosphere is built around BnHA love, BnHA could be a force for good or bad. New people could get into anime if they start by watching BnHA, it is obviously a entry point for a new audience of anime fans. But at the same time, if the anime community peddles BnHA as the best anime there is, it could also alienate people from watching more anime if the majority of people think that BnHA is the best anime there is. I think every anime needs to be critically assessed.