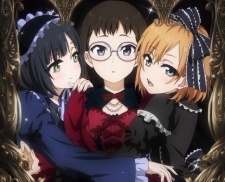 Prankster_001 Jul 18, 2015 6:14 AM
@MoeGod yup bro we had both the same taste and btw i also like Shirobako,Kiniro Mosaic,Koufuku Grafitti,Gochiusa and Joukamachi too and most of the animes of this season are kinda generic and boring to watch

EDIT : Ahh I guess you watched the P4 anime, not sure if you played any of the games. Would probably be too repetitive if you went and played golden now that you watched P4 hmm.. will you watch P4GAnimation?

I guess you'd enjoy it somewhat now that you know general P4 story, but you won't appreciate all of the P4G fanservice as much as those who played the game. But then again, you have an atvantage over those that played the game in that you don't know what happens for P4G original events, so you may enjoy things you didn't see in the P4Animation.

keragamming Jun 30, 2014 10:38 PM
Hey, I see you've Working in your favorite list. You're like the 7th person that I've seen with working as their favorite today? What makes it so good?

tsudecimo Jun 16, 2014 2:46 AM
Yup. He is pretty infamous in shounen discussions, where he will always bash Naruto and One Piece, and praise Hunter x Hunter as the best thing since sliced bread, usually negative about naruto and one piece, and when he is positive he follows it with a negative passive remark. It's also a common knowledge and suspicion between active one piece/Naruto fans, that he is an alt of former users, who had the same wording and same bias. There is a strong possibility that he is just trolling, since most of the time, he argues for the sake of arguing.

As tempting as correcting him when he spouts obviously plain wrong things is, it's really not worth it. Trust me, he won't give up, and will keep using circular logic and reasoning, until you get frustrated and give up.


On another note, I really like your posts, not just because I'm an obviously huge fan of the Naruto series, but because I like your understanding and interpretations of the series. And your thought out posts. Feels similar to my own, to some extent. I just generally like your insight. Keep up the good work!