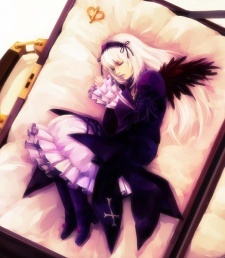 Archaeon May 11, 2012 2:31 PM
Aoi Bungaku is a pretty interesting series that's actually on my list of stuff to rewatch so I can review it. It does have a few issues, but on the whole it's a solid anime, and it threw around some great ideas. I dunno if I really said all I wanted to say about why I like it but I think I got some of it out there. :D

Archaeon Oct 26, 2010 1:51 PM
1997 was the year I first finished university, so I remember it well. I couldn't say the exact date though, but I know it was around August or September of that year as I know I chose the name before my birthday, but after I finished my job with the student union (which ended on July 31st).

Strange how the old memory works, isn't it?

The name was originally mine though, as it's been my pen name and online handle since 1997. I chose it partly because I knew that people would automatically assume it had something to do with fantasy (final or otherwise), when nothing could be further from the truth.

I'm not the only Archaeon on the web these days (although it is highly possible that I'm the original one), but like the two bands, they'll probably fall by the wayside as well.

Such is the life of a micro-organism :)

Here is an update for everyone~
There are member cards which you can get here Member Cards
There are limited edition cards here
If anyone has any suggestions for this club. Please let me know.