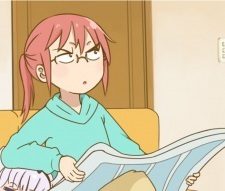 Chandela May 20, 5:51 PM
LOL nice! Yeah it's definitely one of my favorites too! Even the ED animation itself I'm fond of. My buddy called it iconography, or something along those lines, and I love the simplicity of it. If you had to list a top 5 favorite songs, could you? I'm giving it thought right now and it's HARD.

I just wish Parade had a little more.. oomph? Like, you know what'd be incredible? A franchise crossover MOVIE. To the same extent as the OG movie - oh God, I'd cry tears of joy if we got that. The 'Idol Activity! On Parade! Ver.' that was the ED theme is soooo good though! I can't really listen to the original anymore, and I almost wish we had more combination songs like that. That's like the Aikatsu war song for me, like if we had to rush in waving a banner that'd be blasting in the background lol.

I wish I could feel the same way about it as you did.. lol. I'm only up to episode 7 (which I actually found hysterical) and it's such a leap for me to try and binge it out so I can catch up. I wonder how long it'll end up running for though.

Shit, favorite characters are a hard one because I cycle through favorites a lot. I'm ridiculous for Ichigo because she's sunshine incarnate, but I really love Mizuki's role as mentor and in her raising the Aikatsu! standard (that kind of theme I relate to a lot, personally). Aoi however is the best fucking friend anyone could ever ask for and everyone needs someone like her in their lives. Then you got the next cast and Juri is a RIOT LOL. She's so goddamn extra and I love it! I'd have to give it to Ichigo tho... but that's such a hard choice. For Stars it'd be Laura (Rola) but I feel like they did her dirty in the end :( Ako and Kirara are close seconds tho! For Friends it'd be Mio or Ema, both rock their respective styles so well. I don't really have a favorite for Planet but Shiori is fun!

I really need to catch up ><

Chandela May 20, 10:11 AM
Yeah the OG series is definitely my favorite. S3 in particular is what I would consider like 'peak Aikatsu!'. The CG was phenomenal, the characters were bright and lovely, and they really owned what made that show so appealing.

I really miss that whole 'Bon Bon Voyage' arc in Stars! I've only rewatched the show once, but that during it's airing really made my summer a blast. Plus the song is fucking awesome.

How do you feel about Planet? Honestly I really want to like it, but I'm struggling...

Chandela May 19, 8:45 PM
Your collection is SICK - super proud of you for repping Aikatsu!

ThatOneWeeb445 Jan 3, 2:22 PM
Thats cool that you were in the Navy. And yeah washington is kinda chill, I like it here.

Also, what a coincidence that we BOTH live in lynnwood! what are the chances!

ThatOneWeeb445 Jan 1, 1:10 AM
Ha! i actualy just started one this christmas, its a mid sized figure of Cocoa from "is the order a rabbit"!

ThatOneWeeb445 Jan 1, 12:33 AM
Hi, ive just seen you floating around, and HOLY FREAKING COW I AM JEALOUS OF YOUR FIGURE COLLECTION!!!! also sense its around that time, happy new year.

gintokisbicep Aug 23, 2020 12:19 PM
NO IT WASNT MEANT TO BE RUDE IM SORRY IF IT CAME OUT LIKE THAT I THINK YOUR TASTE IS NICE AS HELL AND I REALLY LIKE YOUR FIGURE COLLECTION
All Comments