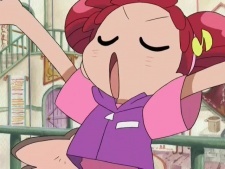 ariapal Jun 1, 2015 5:59 PM
THANKS. I still dunno how I actually managed to review stuff. Writing is hell. Anyway I noticed you recently finished Doremi. I hope the withdrawal wasn't too harsh on you. ;_;

Koushirou the best, I can't help it if you're wrong :)

lpf Dec 25, 2014 3:54 PM
Hello, this is regarding your application for entry into Quiet Discourse. You've been accepted! Please be acquainted with the QD: Club Outline and QD: Club Policies if you aren't already. Also be sure to check out #qd on the Rizon IRC network for chat. We're happy to have you in the discussions. :)

Glad to accept people from the anitwitters!

Don_Don_Kun Dec 1, 2014 4:00 PM
Welp, first of all it's embarrassing to say that I wasn't aware Enokido wrote all of Diebuster (I knew he was involved, but didn't think it was with the entire script). But anyways, that's an interesting interpretation of the OVA, and I can certainly see the similarities between the coming-of-age themes in Utena. I think saying Diebuster is a "retelling of Gunbuster with influences from Utena" is the best way to put it (heck, Ikuhara even storyboarded the second episode).

So yeah, looking forward to rewatching this one since I think my tastes have changed to be more receptive of different styles of presentation. Hoping my opinion on it will change for the better, which was the case for FLCL after I revisited it (I used to not think much of it initially). At the moment, I'd like to hold off giving my opinion of Diebuster as my memory of it isn't the greatest, but I'll be sure to give you my thoughts after I rewatch (which should be soon, seeing as it's a short work).

Speaking of which, I noticed you mentioned to Masserati that Diebuster is a "retelling of Utena", which I never really saw that way, or even as a coming-of-age story. It's been years since I saw it so I'm due for a rewatch, so I'm curious to hear another view on it.

Masserati_ Nov 26, 2014 4:05 PM
You definitely should! Patlabor 2 (although you shouldn't ignore the original Patlabor) and Honneamise should be high priorities. Movies are definitely something I've been trying to watch more of recently, I need a few movies to fill that awkward gap between 790 and 799 so I can make my 800th anime either Night on the Galactic Railroad or Shisha no Sho.

There's a couple of Gainax shows I need to revisit, actually. Eva is a top priority because I'm pretty sure my perspective on it will be significantly different to how it was before. Mostly because I was like, 14 and was more interested in seeing lots of explosions rather than potential character studies. FLCL's also something I need to revisit, I used to love it before but I watched it again and I didn't like it as much for some reason that I can't quite discern. I'll get round to it...eventually.

Masserati_ Nov 25, 2014 1:30 AM
You should watch Wings of Honneamise already, it's my personal favourite Gainax thing.

Although I'm surprised you haven't watched it already :O