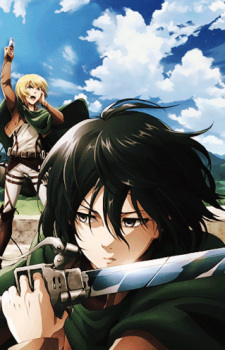 Rxargyros Jul 10, 2018 3:24 AM
HAPPY ADVANCE BIRTHDAY
May God bless you with all great things ahead. Give you good health and longevity.

Johndahon94 Nov 26, 2017 9:57 AM
and look what arrived in our notifications: https://www.youtube.com/watch?v=vQdDXiB5Ikk

you got steam or battlenet?

Johndahon94 Nov 21, 2017 10:56 PM
Honestly, the more I think about it the more I'm considering moving this up to a 10/10 the only thing putting me off is the fact I don't normally rate anything a 10 unless it's completed. This was a Ghibli level work with double if not triple the lengh, shit I just talking myself into it by writing that, after writing that I can't not 10 it. I'm sat here trying to think of another anime that took me into their world as much as this and I just can' think of one, spirited away takes the crown for most magical and fmab for best written but nothing comes close to this in that aspect, it's getting the 10/10.

I wouldn't compare this to aot at all really, the thing I love about aot is how intense it can be, also the characters, like how can you not love sasha where as Made In Abyss had its intense moments but I wouldnt say those moments matched up to some of aot's battles and the characters just felt like part of the story, thats a horrible way to word it, let me put it this way. I would probably watch a show with aot's characters in a completely different setting and still fall in love with some of them/enjoy watching the rest too while I can't say the same for this show. On the note that you were making about aot, aot relies alot more on flashbacks where as I feel here the vast majority l shown at the beginning of the story.

As I was saying with the nudity, I really did think most of them were needed and added to the story, I just kinda felt like the one was thrown in there for the sake of it and personally when watching anime I like to think that I wouldn't be embarrassed if someone walked in on me watching it. Still it definitely didn't take away from it as even that scene was done in a professional and mature manor.


Yea starting the manga will either a wise decision or a horrible one that's basically a spoiler art book. I'm in the same boat with aot and the same boat I was in with game of thrones, the quality of the anime is nothing less then astonishing but I want more of the story and I do know that sometimes the manga is better then the anime, take btooom! for example.

ps.sorry if this is a mess to read I haven't slept and I cba to read over this essay of a response.

Johndahon94 Nov 20, 2017 3:45 PM
I feel ya, I thought it was just a 12episode then finished, I knew nothing about it, didn't even read the summary was just curious about a show so high on the list that popped up out of nowhere. So I sat down, smoked a joint and expected to get though 1-3 episodes, next thing you know its 5:30am and I've watched all of them in one sitting, it truly took me into their beautiful universe. I'm not sure if this makes any sense but it felt like it had a ps1 rpg vibe to it, maybe it was the music and the young characters either way I loved that.

While I feel like it was necessary to show that he was partially human and that they were getting closer, I also feel that one of the scenes where she got half naked was unnecessary which made me feel a little uncomfortable. All in all though it was pretty dam perfect, this has the potential to be a masterpiece and has me thinking about starting the manga.

since I first saw the first season, which was back in 2014. I think xD

I actually thought so myself, and planned to change it, but I was to lazy to actually do it, so I just left it like this haha