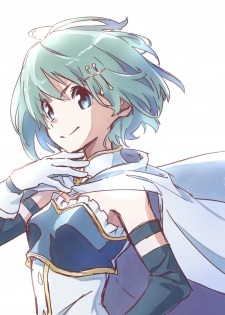 Ryuseishun Feb 15, 2:57 PM
Yea, I think you’ll be proven right. We’re already halfway through and there really hasn’t been much improvement at all. At this point, it’s playing the exact same role as the FGO Babylonia and Azur Lane series were: promoting their gacha games :P

Ryuseishun Feb 15, 9:17 AM
I'm not sure how to truthfully feel about Magia Record right now. It's quite a mess, tbh, but I've been trying to give it the benefit of the doubt in hopes it'll get better, AND because I'm a SHAFT fan. It just doesn't have the same sort of cryptic feel that the original Madoka Magica story had.

PriusKiller2 Jan 21, 10:31 AM
I wouldn't even contend it's really that gimmicky. I've liked the show way more long after I watched it a long time ago. I don't find the characters relatable although the one that would be the most is Sayaka Miki, rather excellent pillars to look at the themes Urobuchi has presented (mainly selfishness and selflessness). I don't find this at all devalues their merit as characters or writing, if anything Urobuchi know how to use them to create an insanely compelling narrative. What are some examples you've found of references to literature or religion, I know that the visual style and direction of Shinbou in particular would allow for some strong symbolism.

PriusKiller2 Jan 14, 12:46 PM
If they don't bring Gen back I'm not watching it, I saw how much I.G. butchered Psycho-Pass without Gen on board and it does sadden me pretty much. I'd rather rewatch Madoka because I think its score could bump, right now I gave the OG and sequel movie an 8 but Monogatari has turned me into a fan of Shaft so I bet that could easily change now and in addition after seeing numerous analysis videos on Madoka I saw that it actually has a really strong narrative (or stronger than I remember it being).

PriusKiller2 Jan 13, 12:12 PM
Honestly I didn't care for it as it was not a proper sequel that would ruin everything about Madoka like what happened with Psycho-Pass (looking at you Season 2). All the character feel like rip-offs of the original which is pretty frustrating, the only reason they chose some of the VAs is that they did the OP for Magia Record which isn't as good as Connect or even Colorful. Episode 2 in particular has a really horrible exposition dump and if you're gonna do something like that do it like Fate/Zero, its pilot has one of the best exposition dumps consider how vast Fate is in general. I've also ranted about it with one of the people I talk to Discord and friends with on MAL, he and I are pretty much on the same page.

PriusKiller2 Jan 12, 10:59 PM
Thank God I'm not the only one who's not taking a liking to Magia Record, the 2nd episode was literally an exposition dump with nothing going on.

Black_Sheep97 Dec 16, 2019 11:46 AM
Have you thought about doing a comprehensive analysis of madoka magica?

Black_Sheep97 Dec 3, 2019 3:04 AM
In what way? Not trying to be confrontational about, im genuinely interested.

Black_Sheep97 Dec 3, 2019 1:36 AM
Does the stair sequence that is reused every single time in utena have a motif or thematic or narrative purposes behind?

PriusKiller2 Dec 2, 2019 2:31 PM
Seems like you enjoyed Hyouka, it definitely has one of the most relatable MCs I've seen (Oreki). I also got a massive kick out of the mystery aspect it was definitely very well done.

Diamant Dec 1, 2019 7:28 PM
Thanks for replying, no worries school and personal life should definitely come first. I appreciate the insight, I will definitely look more into that post, it looks quite interesting!

Diamant Nov 26, 2019 5:35 PM
This might seem a little out of the blue but what about Madoka Magica makes it your favorite anime? I have been thinking about it a lot since I watched the Madoka films recently. Most people I know seem to like the series but don't hold it nearly in as high regard as I do. So I would be interested in your personal thoughts.