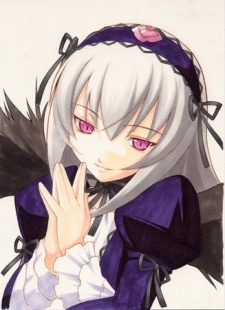 Stealth46 Dec 3, 2018 6:00 PM
Sorry about being some random person commenting on you profile, but who is the girl in your profile picture and what anime is she from? She is so adorable!

Willow_Folk Mar 3, 2017 5:28 AM
Couldn't agree more.
If you'll be kind enough to let me pick your brain .... i'd wonder if there were any anime you've seen that remotely share the same humor/character type?
Closest i've come is Golden Boy, but i dont think there's enough of these characters.

Click Here
Hi! I’m Jackie from Otaku Organisation.
You have been invited to join our amazing club. It's a wonderful club that will soon grow in numbers and provide everyone with a friendly community. You are lucky because you've been invited to this amazing club! Just a warning we are still in our alpha stages so please enjoy and have a look around.

Some people would say legend of the galactic heroes would be this mythical series with fantastic character development with a large cast.

But I agree generally with what you said. People are expecting a bit TOO much with TTGL even though it delivered and was just what many people wanted as a complete package for a series with 27 episodes. Any more character development would mean an incredibly longer series, which is demanding too much for a series outside the scope of its storywriting, but more to its budgets and the business machinery that fuels the industry (making a longer series at the get-go usually is a very rare case due to economical reasons, in other words). RaitoTheReaper Dec 5, 2009 8:22 PM
Hey finally cleaned himself up. Thank God. I can't wait to see what Suou's little secret past is though.