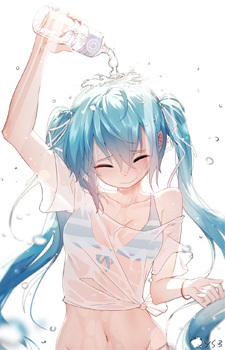 HanamiDango Jun 13, 1:22 AM
At first it sounded like a mild case of 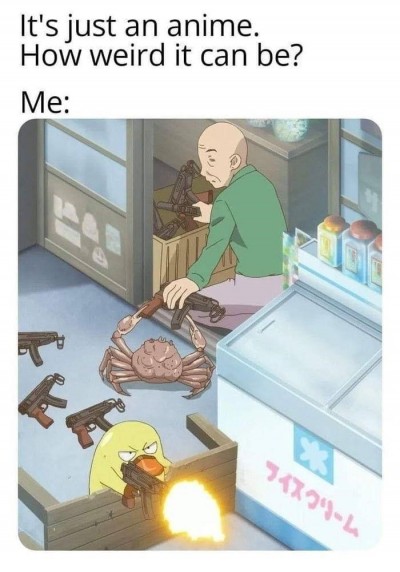 but I realize the more I look into it that it's probably kinda deep. I'll keep it in mind for sure. :)

I understand why some people behave like that when I talk to the girlfriend of one of my closest friends. She's a "huge fan" of everything her boyfriend likes (comics, RPG's and boardgames, superhero movies and so on) but whenever it gets brought up she doesn't know anything but WHEN she knows something she acts important and snarky. She's a grown woman to boot(33 years old!)!

Yeah, I get that! XD It's certainly not everyone's cup of tea. Thanks for listening though. Kraftwerk and Einstürzende Neubauten are germans and Nitzer Ebb is from UK. Lot's of great electronic music from Europe.

Is it The Promised Neverland? It seems to be some similarities. I've watched the first season and liked it a lot, but I haven't managed to watch the second season yet.

The weekend was alright. I've managed to get out of the appartment for a longer walk, which was nice. Other than that I've actually relaxed! Yay! Still, it was a slow weekend but that was what I needed. What about you?

No worries! Just take your time and hopefully everything goes well! ^^b

Immortal_nava Jun 12, 9:14 PM
yeah, i'd recommend aoashi(current airing), Spy X family, 86(highly recommended), bungo stray dogs, classroom of elite 2nd season(yet to air and i reading the light novel and it's freaking good), horimiya and that's enough for now i hope so.
You can ask me any time you wish. :)

Kingofglory77 Jun 12, 2:06 PM
Thats ok and i like mawha is different from manga. I dont have a specific preference really

HanamiDango Jun 9, 11:34 AM
I think your classmates point of view is annoying and a little pretentious but not that uncommon. That's like saying you're not an anime fan because you have genres you don't watch.

I think learning japanese must be a daunting task. Well worth it but daunting.

Congratulations! Even though it was just your class it's still an achievement. :)

Human ranch sounds like it could be dark and suspenseful or just be an edgelords wet dream. Is it good?
I've been (and still is) tired. I wake up, watch some anime, go to work, work, leave work, sit on the couch trying to stay awake and go to bed. Not a lot of action going on, I'm afraid. I started watching Spy x Family a little while back, despite it currently airing. (I usually avoid that because I want to be able to binge or at least not get stuck while waiting for the next episode.) So far it's grean IMO. Likeable characters and cute, funny and serious moments.

No worries about responding late! Reply when and if you feel like it. :)

HanamiDango Jun 9, 10:57 AM
I remember checking it out (I recognize the picture) but I didn't remember about the plot. Sounds delightfully weird! XD

(I'll reply to your longer message in a bit.)

Kingofglory77 Jun 9, 9:47 AM
I havent read many fantasy manga tbh

Immortal_nava Jun 4, 6:24 AM
I was just lazing around through club(Big, Fat, Voluptuous, Round Anime Tiddies) and I found ur forum post and ur profile was also intresting so i gave u a request.I wouldn't really force u to accept the request tho.Feel free to do things as u please. :)

HanamiDango May 30, 11:11 AM
Yeah, I get that. I also like to have music on while doing stuff. I have a couple of friends (well, more like acquaintances but still...) that like to solely listen to music and it makes me feel uncomfortable for some reason. I get it, the song is great but I don't want to just sit around a table and listen to music too loud to speak to the next guy...

Do you study japanese as well?

I understand completely that "my" music isn't for everyone but feel free to try it. Like you say, maybe you'll find something you like. :)

Adele is one of those artists that's really talented (even I can see (hear?) that) but for some reason doesn't appeal to me at all. I can't explain it, but nothing happens. It just is. Sorry! :( I'm glad you like her though. ^^b

So, what else have you been up to lately? School?

HanamiDango May 15, 11:25 AM
I can't say I'm a fan of country music but I can definitely understand the appeal. It's kind of chill and soothing.

I think it's very difficult to pick one favourite song since it depends a lot on my mood. I like most of Kraftwerk's songs but Neonlicht, Trans Europa Express and Autobahn (22 minutes long!) almost always hit the spot. One very good (in my ears at least) is Yü Gung Fütter Mein Ego by Einstürzende Neubauten. It's kinda experimental though, and is probably far from the peacefulness of the country songs. :P

Do you have a favourite song?