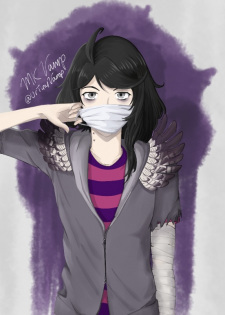 Cloe900311 Jun 1, 2019 3:07 PM
Wow, it was such good timing. xD When I logged on, the site told me you replied two minutes ago. :P I even visited my discussion threads on episodes 5-7 of Banana Fish and the two OVAs released so far for Yarichin☆Bitch Club. I think one reason why you like my "...long comments and how nice [I] discuss the episodes" is because I'm very focused on the characters. I would state what happened, but I would certainly take note of what the characters feel or think. If it's not clear what a character's motivations are, I would question that too. Although, if you read my episode discussion posts, you're guaranteed to be spoiled if you have no idea what the stories are about.... ;-------; Do you mind spoilers? Reading my own episode discussion comments is a great way for me to recap lol, so yay! XD

Twittering Birds Never Fly has a spot in my heart for being my first BL manga, which solidified my BL journey :)) I even have buttons of the series haha! And I wanted to buy the manga from June, but there were copies that were out-of-print, and it's out-of-print in my country too.... :( I hope the ending is nice! It bothers me when I'm in love, but the ending is just so meh that I tell myself to act like the ending never existed lol. And I am happy there will be an animated movie. The voice actors from the BL drama CD were just *______* so we'll get ear-candy through the anime too <33

If you want to see more people passionately talk about BL, there are certainly places you can go to! :) If you're an active reader, many people post on mangago. And we always have Twitter; people can find you when you hashtag and send you private messages or tweet you, when you least expect it lol.


I kinda wanted to see more people talk like that about BL. Especially Banana Fish.
<- You especially want to meet people who talk about Banana Fish, or do you mean that I was especially passionate about the series? xDD And I will continue watching the series! I'll go at my own pace, for sure. :)) I want to take my time enjoying the story. I'm not one of those people who assert, "I'm only here for the BL and nothing else." <______< If there's a good story, we might as well enjoy that too lol. And I think that's how you are too, for praising Banana Fish so highly ^^

Haha, it's obvious I love BL, huh? xDD Anime in general takes time to watch. Sometimes, my sister and I binge-watch anime too, which is usually when I don't comment on every episode discussion thread of a series. :P Maybe I'll make more reviews if I binge-watch a series and get feels for it.... Hmm.... That's something to consider. x))

I try to watch anime that I have a feeling I will enjoy. I tend to enjoy stories that aren't very fixated on archetypes, and I try to avoid stories that are severely abuse, like rape being a common older trope, but not explained or explored. I like it when I can understand the characters especially :)

Cloe900311 May 28, 2019 6:16 PM
Hey, I accepted your friend request at about 10 AM in my timezone while I was in class, waiting for my professor. I didn't expect you to leave a comment first, because I usually do that when I accept friend requests lol. Anyway, if My Anime List isn't the site you go on often, you can let me know where you prefer to chat then :)) I accepted your friend request because we've been excited about the movie adaption Twittering Birds Never Fly, and it's always nice to see more people hype the series! :) Which stories caught your eye to ultimately send me a friend request? I'm your fourth friend on this site; are you selective in choosing your friends? :P Anyways, nice to meet you too! [size=90]Hello!
Our club needs more active members. Here are some updates and activities to participate in:

Introduce Yourself
Manga of the Week
Anime Talk
Simulwatch with Us!
What's on your mind?

Vote for our next Simulwatch!
Vote for your fav author!
BL Categories is Hiring!

Chat with us on IRC @ #bl-categories!

GAMES:
Emoticon Chat Thread
Is the character above a husbando or not?

SHORTCUTS:
Don't forget to hit the "Toggle Watching" option on these threads so they can be easily accessible ;)

NOTE:
This month the newsletter was sent to all of our lovely club members to encourage subscription and participation from everyone. If you wish to continue receiving these, please ask for it (if you haven't done already) here in this topic.

Hope these updates helped! Have a good day
- BLC Staff

Join us for a simulwatch Christmas Eve and Christmas Day!

[size=90]Hello! Our club needs more active members. Here are some updates and activities to participate in:

Introduce Yourself
Manga of the Week
Anime Talk
Simulwatch with Us!
What's on your mind?

Vote for our next Simulwatch!
Vote for your fav author!
BL Categories is Hiring!

Chat with us on IRC @ #bl-categories!

SHORTCUTS:
Don't forget to hit the "Toggle Watching" option on these threads so they can be easily accessible ;)

If you'd like to keep receiving these updates then please sign up in the [url=http://myanimelist.net/forum/?topicid=1328505]Newsletter[/url] thread!
Otherwise, don't. Hope these updates helped! Have a good day