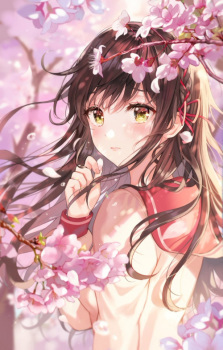 AltostratuS Jan 19, 7:39 AM
Oh, about my writing u can say it's some type of lyrics, but to be honest it's been a while since I had the time and muse to write something down.
What about the stuff u're writing?

omg Jan 18, 2:40 PM
o i get that feeling :(( i tend to get very bored of games quickly if its not competitive? like, i dunno the only games
i legit find enjoyable are competitive type of games like, league, valorant, apex, cs:go etc. i honestly wish i wasn't like
this LOL it's so annoying because i just can't play games for long if it's not in a competitive play style. even when i play
multiplayer games like, it takes two or dying light YEAH it's fun for a bit but then i just think... uhm i'm bored of it i want
to go play ranked or something @_@ but yeahhh hopefully i do get around to the DR series !! and actually! i ended up
hitting the highest rank in the game but now i'm like hard-stuck gold LOL and can't get it out OOF so i took a break. now
i'm just focusing on reaching silver or gold in valorant and plat in league! tbh after i hit my goal in dbd i just don't have a
reason to play it? yeah, it's fun with friends etc but i dunno i don't see the point :// all my friends or my s/o tilt so much in
dbd its so funny. i legit just scream because i get scared easily DKJEWHFLQ. i did meet someone so that would have to be
it c: we've talked about meeting eventually which i can not wait for ;o; it's nice because they live in the US! it's just nice to
start a new chapter in your life. how about you? anything new?

aww i bet :((( i know what that's like i hate when i get like that because i dunno what to do. hmm it's more like just moving on
from a break-up etc. those are never easy especially when you're close with that person then all of a sudden they're gone and
you just have to move on. but yes i agree! it's easy to distract yourself from it which i did. now i'm in a time in my life where
i'm a lot happier with the people around me c: and no worries! sorry as well i don't either because i suck at watching anime aaa so i don't see the point of checking mal

omg Oct 16, 2021 3:01 AM
it has :c waayyy too long and o yeah, i do enjoy them a lot but i just haven't played them as much i guess?
i own the danganronpa series but haven't played them yet !! i've been playing way too much dead by daylight :o
i really want to reach iridescent (the highest rank) this month in that game. i was inactive! there was a time where
i didn't get on mal or discord for months :// life just became too busy aaaa

and aww really? :(( that sucks to hear so i hope things start looking up for you ♡ and i'm pretty meh. just
been trying to move on from things and be happier but other than that i've just been indulging into my hobbies
during my free time c:

PerfectAzul Aug 29, 2021 3:20 PM
LA actually hasn’t been too hot—at least not compared to what I’m used to. It helps that it’s not very humid here and that the ocean is fairly close. My internship has been going well. Thanks for the kind regards! What have you been up to lately?

My favorite thing about Demon Slayer is the relationship between Tanjirou and Nezuko, and how they’re trying to stay together despite all odds. That’s the main reason why I’ve put Demon Slayer among my top 25 anime, despite a lot of its plot elements being pretty standard. I felt like the movie didn’t handle this aspect of the series as well as the TV series did. But it definitely made a respectable attempt.
Anyways, that’s the end of my Demon Slayer movie Ted talk lol—thanks for reading. I still scored the movie an 8, so in no way did I think the movie was bad.

Eder Aug 15, 2021 1:41 PM
Yeah, it was very frustrating. I'm glad I'm no longer there. I was fortunate enough to find another job that's full-time, decent pay, and close by with some remote work days, so that's good. I was super lucky considering how little opportunities exist where I live.

Also, I might read MUSICUS! later this year since I've gotten more interested in it; I'm gonna wait for it to go on sale. I might read it after Muramasa, since I am pretty excited for that.

Timbsoka Jul 31, 2021 8:44 PM
Hey how are you? Hope you've been doing well! Can you fill out this quick survey? All you have to do is check the boxes for whatever series you recommend. Thanks :) https://forms.gle/Ytczt2ypYsci6s7V6

SweetMonia Jul 27, 2021 8:57 PM
Indeed she is. Despite the fact it has been several months since I pulled her, I still use her a lot. I finally pulled my Ayaka after 9 months of waiting. So I am so happy~ :3

Exactly! I don't trust most reviews for that very reason >.<

The book is called "Shutting Out the Sun: How Japan Created Its Own Lost Generation". Tell me if you got to read it :)

I can understand that in a way. I find it hard to keep reading on a specific topic for a long time, so I have to divertise. Not everything manage to keep me interested for a long time too... The way I imagine it, I think of writing books as a marathon, where you have to be able to do a little at a time. So far, I only ever did it over a short period of time, where I finished the book rather quickly, which caused me to not want to do it for a while. Maybe that was the case for you too.

And here it is again. I so apologize for the late reply. I had to go off for some time. I will try to keep on touch as much as I can. >.<

Disuh Jul 23, 2021 3:24 AM
I have the habit of isolating myself whenever that happens, even though I see the importance of interacting or venting to friends, it’s not the easiest when it comes down to it. What I would suggest for others is to, as I said, keep in contact with friends, but also value alone-time and try to keep a routine. I think routines can play a big part in helping to get back. Even if it could be physically and mentally exhausting, it would surely put one's health in the right direction. It’s a process but it’s worth the time.

Oh, same here actually. I didn’t know about the game until a friend suddenly told me to play it with him. I don’t use mods on Sims but I wouldn't mind trying it. I don’t even play with expansion packs but that would be nice too. Also yes, I play on PC! Do you use mods and/or expansion packs?
Despite how toxic league can be, that is the only competitive one i can handle right now. It stressed me out too but I think it got a bit better as I spent more time learning it. I also usually go AP^^ I have yet to try Nami.

I see :o I started P4G on my friend's PC but never got to continue it. I looked forward to it so
much that I got up to 24 hours in just a couple of days xD Other than that I’ve only watched gameplays for P3-P5. Aah yes that’s a really good song! Hm for me it would be Beneath the mask from Persona 5, It’s just so chill. I also like Never more from Persona 4.

Yes exactly. Why couldn’t the MC be in University instead? It would have been less weird and imo wouldn’t affect the story by changing it to that setting. Then there was this other one who I believe was a bit alike? Higehiro I think it was called? To have both of these air the same season sure was something. I hope this won’t become a trend.

Hmm if you haven’t already, maybe you could take a look at some reviews of some shows that really interest you.

howtroublesom3x Jul 8, 2021 8:06 AM
It's depressing indeed, but I'm somewhat addicted to "sad" songs for some reason, hahah. I'd say try some Motionless In White (Eternally Yours, Another Life, etc.). You could also listen to the newest Palisades album - Erase The Pain (if you haven't already XD). Alsooo... to throw a few more - ONE OK ROCK, MY FIRST STORY, the GazettE (this!), Memphis May Fire. Live shows hit different, that's true! I'm sure you'll enjoy them once you get to go on one. ^w^ Yes, I'm from Bulgaria. The pop-punk genre kinda died out around 2010 I'd say. It was at its peak back then. But it's still relevant to some people nowadays too. I'm moody when it comes to what I want to listen, hahah. Sometimes I like to listen to one particular song on repeat, sometimes it's a whole album and sometimes it's a random playlist or genre. I think it goes like that for most of the people when it comes to music. ;DD

Yeah, toxic envorionment brings down the enjoyment of any game significantly, but at the same time, I like playing against real people and I like games where there is a ranked/division system in place so I can track my progress. XD I played DotA for like 7 years before I moved into League of Legends once it came out, so I already had experience with this type of games. Yeah, I can handle gore stuff. I like watching horror movies and stuff, so I guess I'm used to it in a way and it doesn't bother me anymore. Horror games (if well made) definitely keep me on the edge, though. How about you, do you like "scary" movies/anime?

Oh, so you're close to tons of books now. Makes sense that you really enjoy reading. I'm trying to read when an opportunity presents, but time is an issue... one can only do so much, hahah. I used to play volleyball semi-competitive (for about 10 years), but now I only go to play with a group of people from time to time. I go to swimming usually twice a week, and it's usually something to replace running as an activity. It's one of those closed olympic sized pools with multiple corridors, each 50 meters long. So I'm doing 1 or 2 kilometers and go home afterwards. XD

Don't apologize for the late responses, I also take my time, especially when it's a longer reply, hahah. Anyways, how are you? Is everything okay? Also, how do you want me to call you? ;3

I saw that you watched the first episode of Kobayashi-san Chi no Maid Dragon S. Did you like it? I'm really excited to watch the show, because it's from Kyoto Animation, but I haven't seen the first season yet, so I'll be starting with that. Would you recommend the anime? ^^
All Comments