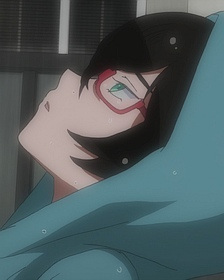 Akaraed Jan 27, 2019 6:46 AM
Hi there! I think I have found yet another person with tastes similar to mine... Props for giving Monogatari, Revue Starlight and Houseki no Kuni (and also Madoka) a 10.

I suggest you to also watch Mawaru Penguindrum and Kaze ga Tsuyoku Fuiteiru, you should like them.
And I hope to have a nice chat sometimes... Have a nice day

Prankster_001 Jan 13, 2018 5:34 PM
hmm looks like 007 would even like Princess Principal too and well i need to finish watching the last episode of New Game

Prankster_001 Jan 13, 2018 7:54 AM
Well i had read ur comment on Toji No Miko btw and honestly it will be better than Marchen Madchen and to be fair the fanservice in Marchen Madchen are more like CRITICAL level though

SpoilerMagnet Dec 19, 2017 9:52 PM
No. Thanks to you. It was necessary. It has just enhanced my knowledge of this genre.

Everyone gets their story told and each get their own happy ending.

czxcjx Jun 23, 2017 5:35 AM
I guess the simple answer would be to try to get at the 'human core' of everything - although it's not a simple answer because being able to do that is so hard. You must be able to step out of your own interpretations and cast a vaster net. You have to open beyond your own interpretation based on any strict rules (moral or aesthetic - like Aristotle) or personal taste, but also prevent yourself from going into the realm of infinite interpretation - which can easily lead to conspiracy theorizing style analysis. One thought experiment that critic Dan Schneider came up with is that you must imagine, millions of years later, that a super intelligent alien species comes across the work of art in question - and to what extent that alien can gain knowledge about what makes humanity tick from it.

An example from film history would be A Clockwork Orange. Although it involves a villainous protagonist that gleefully indulges in rape and murder - shown on screen - it still teaches something essential about the human condition because it's willing to go into these areas w/o just being torture porn. The second half of the film depicts how, even with a person as reprehensible as Alex, we still feel pity for him when he is forced to suffer because his human agency has been removed from him. This is a comment that could apply to politics and government control, but it could also apply to many other things in general - and you can imagine many interpretations to be formed from the premise.

An interesting analogy that I picked up from critic Alex Sheremet is that Art is not a wide net that you throw over a surface, but a narrow drill that digs into a specific area of the world and, by expounding on this specific area fully, opens up new horizons for humanity in general. It translates reality - and does not care if that slice of reality is morally pernicious or not. For example, I have no clue about what being a gangster is like - but when I watch a film like Goodfellas - I can still learn lessons about human foibles from it. I am also not a rich WASP surrounded by the upper crust - but I can learn things about the nature of power and crime from watching Woody Allen's Crimes & Misdemeanors. The critic Jonathan Rosenbaum criticized Woody Allen for not depicting stuff like lower class suffering - but Woody Allen is a different artist from Martin Scorsese, and his portrayal of upper class hypocrisy is just as biting and as important as Scorsese's depiction of criminal grit.

Even I myself find it hard to cast a wide net like that - but I recommend that you read the reviews of Alex Sheremet if you want a person to can get a grasp of a larger picture. Here are some of his reviews where he comments on political works, but in a larger fashion:

I like the last one because it has this comment - that dives to the heart of the matter:

"Despite its moments, however, American Radical is not a great film. It is merely a good one, for the very nature of its subject is reflexive, and has remarkably little to do with the outside world, even as its players – for good or ill – try their best to be a part of it. There is a ceiling, then, the film tries to resist. It often fails, yes, but when it succeeds, one notices a force that even its participants are not privy to, a fatalism that attracts, repels, and leaves one with an ambiguous impression of both man and work, and how they play within the deeper drama that unfolds."

So, if that super-intelligent Alien species were to come over & watch the film called American Radical - it would only know about the detritus of the politics of the time, now turned into the dust of the past, and it would not have as much knowledge about the politics & power-plays rooted in the very heart of man.

ZephSilver Sep 26, 2016 1:47 PM
Sorry for the late reply and thank you, I'm glad you liked it. Hopefully I could keep you entertained with the other nonsense i've written and friend request accepted.

Most of the things on my list I watched while airing. Twenty minutes a week isn't a huge deal, even if it's an anime I dislike, so I usually power through to the end unless it's dreadfully boring or something. Same goes for sequels.

My rating scale is a bit strict, too, I suppose. A five to me is a totally acceptable anime, whereas a four is merely poor, a three is bad, a two is dreadful, and so on.
All Comments