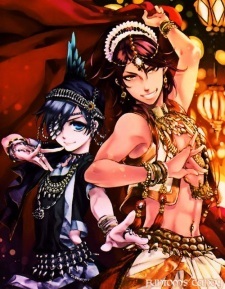 joshuad2002 Feb 20, 2021 10:47 AM
yeah about the junjou Romantica OVA it's too bad that it got deleted by rightstuf due to copyright. maybe they should have just put it on the Blu-rays it's not that hard.

joshuad2002 Nov 26, 2020 9:29 AM
I know I haven't talked to you for a while. but I finally got ahold of the junjou Romantica OVA if you want to see it again. I can upload it to my youtube or something.

joshuad2002 Jul 18, 2020 10:52 AM
ok no playing nice anymore. this is the official announcement of the hashtag I came up with. #Saveuzaki vote with your words and wallets people. they won't cancel us. https://amazon.com/s?k=uzaki+chan+manga&ref=nb_sb_noss the manga is a good start. let's get this going on twitter or anywhere else hashtags are used #saveuzaki

joshuad2002 Jun 17, 2020 4:03 PM
this might be a dumb question but I saw your review of the junjou Romanica ova and I'd like to know how you got the 2 episodes of the ova. the ova seems to be hard to find and I don't think their on the blu-rays. so if you could help me that would be great thanks.

Interesting to see Tokyo Ghoul in your favourites. I'm currently reading the manga, and loving it quite a bit more than the anime.

Harume_Tako_4 Jan 7, 2020 11:13 AM
Ah, diverse! Those are part time studies you're doing on top? (This word is confusing because the 'minor' is part of our third year, in which we're given the freedom to follow basically any courses we want). So apart from just writing, you're also doing a study related to it, nice! What type of things have you written?

So purchasing power and the Dutch version of the word are literal translations of each other. That's indeed the definition we got with economics as well. I dropped the subject, but actually thought it was quite interesting too. What's with me and broad interests?

Taxes are about 37.5% for anyone with an income lower than (roundabout) €70000. Only if you earn more than that, the taxes on money you earn on top of the €70000, are about 50%. America has a flat tax rate, I think? How would lower tax rates play into the money issue, though? I might be misunderstanding your question here XD

The process around retirement funds is more strict here too. The amount of money that's held back isn't negotiable. I do very much prefer the system here, though.
Wait, if I understand correctly, when you work until the agreed age, you get twice the money you let your employer hold back? Wow.

Also, as a bit of randomness... There's a group chat of people living in the same student complex as me, and I am sure its ridiculous name is only an inside joke. But for some otherworldly reason, it has the same name on Google Maps. -_- This inside joke went way too far XD

Harume_Tako_4 Jan 6, 2020 12:17 PM
I'm actually surprised at myself for not including a dead-serious, non-hypocritical "I dO NOt AppREciATe sArCaSM!" in my previous message. That's a very admirable job to study for, though. Sounds like a tough study as well, considering you've gotten so caught up in it the past months. Ah, well, that's to be expected. It also aligns with what I hear about it in the Netherlands XD

The average salary here is around €35k. Converting that, I think that's very similar to the low salary in America you mentioned ($40k). Now, I've tried translation sites for a specific word, but... don't tell me 'purchasing power' is actually correct English. It already sounds stupid in Dutch, but that sounds even weirder. XD
I assumed you could buy pretty much the same in America and the Netherlands for an equal amount of money, until you first mentioned the debts. Could a difference in that regard play a role? Regardless, I can see what you're saying about consumerism being very prominent in America. To some extent, it's a thing here as well, but definitely way less so.

Here, depending on how high it is, a certain portion of your income is held back as gradual repayment (with things like student loans and mortgages, anyway). Do you mean that with doing budgets, or people themselves reserving a certain portion of their income to repay debts?

Thanks, I'll definitely check all of those out at some point - except for the diabolical one. The rest sounds like very fun stuff!
All Comments